The Hub wakes each morning at about 5 with a spring in his step, raring to see what adventures the day will bring.  I  usually go to sleep a couple of hours before he wakes, so I am not apt to rise and cook him breakfast.  In all of our married life I would guess the number of pre-work hot breakfasts I have made him would number somewhere in the 50's...maybe.  If only Pinterest had been around longer my numbers might be in the 100's by now.  While trolling the food and drink category I spied this recipe for an easy pre-made breakfast omelet muffin.  Despite the confusion over what to actually call it I followed the link to My Kitchen By the Lake.  There was the answer to the residual guilt I have felt for all of these years, sleeping instead of cooking. ( If you really believe I have felt guilt over not waking at 5 a.m. when normal people should be sound asleep,  I have some prime land on the edge of a swamp I would like to talk with you about purchasing) 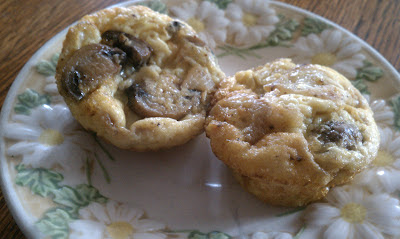 Brown the sausage in a saute pan over medium heat.  Remove from heat and stir in the vegetables to wilt.  Whisk together the eggs, milk, oil and baking powder.  Season as desired.  Spray a 12 count cupcake pan with pam ( even if it is nonstick).  Spoon the sausage/veggie mixture evenly in each cup.  Ladle the egg mix over  each cup.  Sprinkle with Parmesan cheese.  Pop in the oven and bake 15-20 minutes.

Let cool and pack in a single layer in zip loc bags.  2 quart size bags worked fine. Put them in the fridge until time to eat. These are supposed to be equally good frozen and reheated.  I am not sure I am going to try that with this batch.

I only used the recipe as a suggestion.  Instead of sausage I substituted cubed ham and chose onions, mushrooms and peppers as the vegetables.  I sauteed them to a very wilted stage then tossed the ham cubes over and stirred until it was uniformly hot.  Probably unnecessary since I was going to bake it all but I wanted the veggies to be smothered in ham flavor.  In addition to the salt and pepper I added about 1 teaspoon of parsley flakes and 1 teaspoon mild chili powder.  We prefer Western omelets over traditional ones. ( OK I prefer them.  I don't like eggs and try to always disguise the egg flavor and texture.)  I had some sharp cheddar grated but forgot about it so I have sans cheese biscuit omelet muffins.  When they had cooled a little I took them out of the pan and put them on a wire rack to cool.  One of them was stuck so I am sure it was a divine message from above telling me to try it.  Honestly, it was delicious, and this is coming from someone with no regard for eggs at all.  They were light yet held together perfectly and the chili powder and veggies added plenty of flavor and texture to cover the egginess.    The cheese probably would have sent them over the top.  I will do it next time

I guess the true test will be in a few hours when The Hub is awake.  I plan to write him a note reminding him that I slaved all afternoon ( 10 minutes prep time)  just for him.  He will need to put them on a plate and zap them for 1-1 1/2 minutes, or take a couple to work and zap them there.  Whatever he does I will not know because I intend to still be asleep with the rest of the civilized world.

Posted by Anne in the kitchen at 10:10 PM No comments:

The Man In Brown Cometh

Don't you love the day when something you ordered finally arrives.  This morning as I was getting out of the shower I heard the doorbell ring.  Yikes!  At first I thought I was being Love Bombed by my mom, but then I heard the familiar sound of the UPS truck pulling out from the front of the house.   Since Son3 left for school and there are no picky eaters left I have been trying a few new things and bought a few new toys.

The first purchase was a food dehydrator.  I have been drying almost around the clock since I got it.  For the record 3 1/2 boxes of sliced mushrooms reduces to fit into a 1 cup container.  5 pounds of potato slices will fit in a quart freezer bag.  The list goes on and on.  I am really glad because I can take all of the fruits and veggies that used to wither and be thrown out and dry them instead.  My produce waste has decreased considerably.  I also learned I can dry all my vegetable peelings and  feed them to the chickens and pigs.  Of course I have no farm animals living with me in Suburbia, but it is good to know the next time a random pig shows up at my doorstep.

Today Brown brought me a tortilla press.  I had decided a while back to start making our tortillas.  We never use a full pack of them and about 1/2 of the package will dry out before I think about doing anything with them.  In addition to the food waste I have become an ardent package reader.  You would be surprised at what all is added to corn tortillas.  In their real food state they have just 2 ingredients, Masa Harina and water.  Masa is merely dried corn treated with lime and water, which is dried again before grinding finely and water is just water.  I had the Masa and a new press so it was inevitable that I would have to use it tonight.  Fortunately I had just pinned a recipe for Chicken Tacos with Cilantro Pesto.  It is from What's Cooking Chicago and you can find it right here http://joelens.blogspot.com/2010/05/cilantro-lime-chicken-tacos.html. 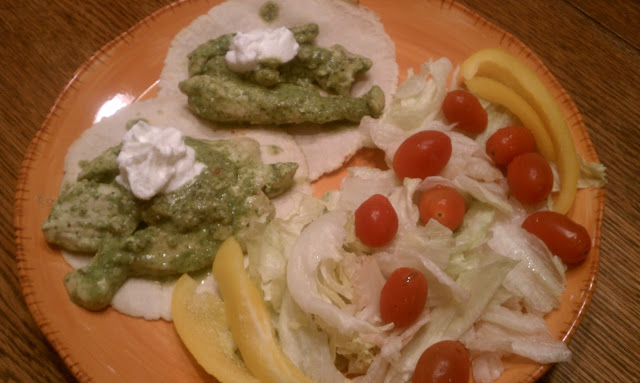 Mix everything in a blender or Magic bullet until it is well blended and a little creamy looking.  Set aside.

Slice  3 large chicken breasts into strips.  Salt, pepper and add a little garlic powder.  Spray a pan with Pam and quickly cook the chicken.  When it is cooked through ( about 5 minutes) add the pesto to the pan and heat through.  Place on top of warmed soft tortillas and tops with whatever additional taco toppings you wish to use.

In a mixing bowl, stir until it holds together and is smooth.  Roll 4 walnut shaped balls.  Remove 1 from the bowl and cover the remaining with a damp paper towel.  This step is important, so learn from my mistake rather than your own.  Press according to the instructions with the tortilla press.  Mine said to line both surfaces with plastic.  It made removal a piece of cake!  Cook on a hot griddle for about 40 seconds, turn and cook the other side for about 20 seconds.  when all 4 are cooked set aside until right before ready to serve.  Cook again  30 seconds per side. Easy, easy, easy!

I have been buying sales items for a while now and freezing them for later use.  I ran across cilantro a few days ago for 59 cents a bunch.  I think I bought 5 of them, washed and removed the leaves, then minced them and stuck them in old plastic ice cube trays and popped them in the freezer.  I did not dry the leaves before chopping so there was a fair amount of liquid  in them.  When they were frozen I took them out of the trays and put them in a ziploc bag.  I figured each cube is about 1/4 of a cup so I used 3 of them for the recipe.  I halved everything but decided I had rather have a little too much cilantro then not quite enough hence the 3 cubes.  Since I had moisture in the herb already I did not add the chicken broth.  We didn't miss it.  Other than that omission I followed the directions completely.  I took out a bunch of green onions to slice over the tops of the tacos but I forgot to do it so we only had a dollop of Daisy Light sour cream. ( Read the labels on your sour cream.  Daisy is the only one I will buy anymore).  personally The Hub and I like a little heat and when I make it again I will add 1/2 of seeded pepper just for the kick it will give.  I will also cut back on the salt a lot.   It was too salty for us.  It is a very fast entree.  I spent about 10 minutes prepping and another 10 cooking.  I am adding this to the quick dinner rotation.

Now back to waiting for another delivery!