According to whoever "They" are, this is the week when New Year's resolutions are broken.  That is why I tend to wait a few weeks into the new year to even think about mine.  Of course I always make the usual resolutions, but my biggest one this year is to be a healthier, better me.  That means eating healthier, with less fat and sugars added.  Boring?

When I saw this recipe on the blog Oh She Glows I  knew it was something I would try. They are called muffin tops on her blog, but after baking them I really think they are more like cookies.  I love sweets but I really love the idea of making something desserty with no added sugar ( except for the tad in the chocolate chips)  I would not call these sugar free because it has quite a bit of natural sweetener, but that being said, it is all sugar in its natural unprocessed fruit form. 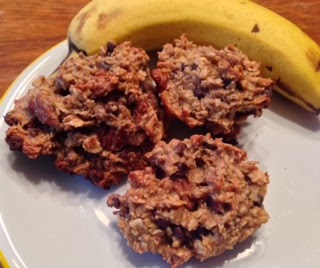 In a food processor using the center blade blend 1/12 cups of the oatmeal until it is a very coarse flour.  Remove from the processor bowl and put aside.  Put the banana and dates in and blend.  Add the coconut oil and the vanilla and continue blending until it is relatively smooth. Because coconut oil remains solid at room temperature you might prefer melting it first.  I did not since I guessed it would incorporate pretty well as it was.  It did. ( Use a spatula to scrape down the sides a couple of times, being sure to turn off the food processor when you do it. Don't just stick a rubber spatula down the chute.  The spatula will lose that battle every time.)  Add the salt, baking powder, and cinnamon and blend a few seconds to mix well. ( Personally, I left the cinnamon out because I do not like chocolate flavors mixed with cinnamon)  Add the oat flour and blend about 5 seconds.  Scrape the batter into a clean bowl and stir in the remaining oats, chocolate bits and the nuts.  Line a large cookie sheet with parchment paper and scoop  the batter into mounds.  Do not smooth or flatten them. It made 12 cookies.  Bake in a 350 degree oven for 6 minutes, rotate the pan and cook for another 7-8 minutes.  Let cool (so you won't burn your mouth) and enjoy.

I am always highly skeptical of recipes like this and thought they would taste like banana flavored sawdust, especially after  I saw the cooked product.  They are not very pretty.  I was actually kind of surprised at how good they tasted.  I had one with a cup of coffee and felt like I was indulging.  What a treat!  But alas, since they are ugly, don't serve them to your Mother-in -law or anyone else you are trying to impress.

I did learn a couple of things while making them. ( I tried a couple of batches to see what I liked better)
Blending the oats into coarse flour helped the consistency quite a bit.  The first batch was a bit more rustic. The ones pictured are the first batch.

I used pecans for the first batch because I had no walnuts opened and I did not want to open a new bag to use such a small amount.  They were good but would have been tastier if I had toasted them first.
In the second batch I added a little orange peel and cinnamon.  They tasted like banana nut bread cookies.  This is something I will make regularly.

It seems each time I buy bananas there is one that gets too ripe for eating.  I always put those, unpeeled, into the freezer.  Since this is so easy to make it will not take but 2 bunches of bananas to have enough to make them.

And this answers the question about my aversion to bananas.  It is not the taste I object to, but the texture.  So, a nice little banana oatmeal cookie works quite well.  Now the only critical question left is why on earth I had 3 pounds of dates on hand!

What do you do when you get back from a  trip and realize you forgot to put the apples that were in the fruit basket into the crisper.  I arrived home to a bunch of wrinkled apples, and not just any apples but Honeycrisp which are my all time favorite.  I hated to toss them but they were very wrinkled and felt soft.  I decided to feed them to the garbage disposal and was cutting the first one into disposal size chunks when I realized all they needed was a deep peel.  Inside they were still perfectly crisp and juicy.  After eating one of them, there were still  4 bare naked apples left.  What to do with the remaining four?  Dilemma, Dilemma! (Sung to the tune of "Traditions" from Fiddler on the Roof).

Years decades ago I bought a cookbook "The Grassroots Cookbook" which consists of recipe collections of women from all parts of the country.  They were older gals with hundreds of cumulative cooking years between them, nice, no frills down home cooking representing each area of the U.S.  Whenever I have had an abundance of apples  I make Annie Poole's Fresh Apple Cake. 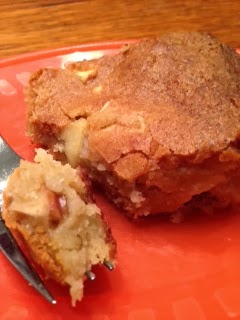 Now I don't know Annie or any of her kin and to my knowledge can't think of a soul I know from the Ozark's, but I do like her  area's recipes and the little asides about her life and family. Everything in her book section conjures images of a warm loving family centered in a kitchen smelling of one pot meals, cakes and cookies.  This cake will provide you with those same warm fuzzies plus it tastes delicious.

Cream the butter the add the sugar beating until it is light and fluffy.  Beat in the egg and then stir in the apples.  Combine the flour and baking soda and mix with the wet ingredients.  Add the vanilla and stir well.  The batter will be pretty thick.  Spread into a greased and floured (or Baker's Secret spray) 8x8
pan.  I have used  an 8 inch round also and both work very well.  Spread the batter and bake for about 40 minutes, until the cake is nice and brown and it pulls away from the sides of the pan.  Because this cake is so moist it has to cool before it is cut so put the hot pan on a cake rack until it is completely cool to the touch.  ( Who are we kidding, pull it out of the oven and plop it on a cool burner on the stovetop and save washing a cooling rack.)  Then cut into squares or wedges ( your cake pan will determine that) and serve.   I usually zap it a few seconds in the microwave just to warm it a little. I love it plain, but The Hub loves his with a little vanilla ice cream.

This is a moist light flavored cake.  Instead of spices usually associated with apple cake this tastes like vanilla, apples and butter.  I have served it every season of the year and it goes over well, but I find we like it best in cold weather with a hot cup of coffee or tea.  If you have a piece left and do creative reasoning it makes a fantastic breakfast.  Follow my logic here: apple is the fruit,  egg-protein, the flour is the grain and  butter is the dairy. See, a complete meal!

If you want a home baked cake but don't want a lot of fuss and bother this is the one for you.  And if you make it give me a call.  I can bring the coffee!


Posted by Anne in the kitchen at 8:29 AM No comments:

A few days ago I was looking at my Facebook page and saw a link on a friend's status.  Jill has a blog called Cooking What I Pin  and each time she posts I wander over and look at her latest Pinterest conquest.  When I saw this I knew I would be making it soon, just not as quick as I did.

We had just returned from Portland to meet our new granddaughter (BTW she is the most beautiful, smartest, most athletic, and most loved baby in the entire world.  I know some of you will disagree, which is fine.  Joining the Granny Club is the best thing in the world and I would think any of you who are members would be insane to not think the same of your Grands.)  Time was short and dinner needed to be cooked pretty darn quick and per usual I had not gone to the store and had nothing  defrosted.  Thanks to Jill we actually had supper that was not the take out variety. ( The best part of this recipe is it contains ingredients I have on hand all the time.)

In a large bowl, stir together the ranch dressing, pesto, tomatoes and 1 cup of the mozzarella cheese.  Add the pasta and gently toss to evenly coat.  Put it in a baking pan. ( I used a pyrex 9x13 hit with a couple of sprays of Pam) and evenly sprinkle the remaining cheese on top of the pasta. Cover with foil.

Pop it into a preheated 350 degree oven for 15 minutes.  Remove the foil and bake an additional 5 minutes. ( Or do like I did and just put it in the microwave.  I cooked it 3 minutes on full power then an additional 4 minutes on 25 percent power)

I served it with an iceberg wedge and French dressing.  Personally I dislike French dressing, but I am trying very hard to limit food waste and The Hub had bought it and opened it.  So bad salad dressing was what we had. (Mumbles something about hoping this stuff disappears soon! )

Everyone here loved it.  I can always tell whether something is a success by the number of times Son3 refills his plate.  I think he ate the first then grabbed 2 additional servings.  He has asked that we add this to our  regular food rotation.

Next time I plan to add some additional vegetables to the mix.  I think some julienned onion and zucchini would add a vegetable serving without altering the delicious flavor.  I will also reduce the mozzarella topping to 1/2 cup and add 1/4 cup grated parmesan.  Mozzarella is not our favorite cheese so I think the sharper parmesan would be a little more in keeping with our preferences.  I might also add some cubed cooked chicken next time just to see how that tastes.

I would suggest you try this for a quick meal.  Use your imagination and add whatever sounds good to you.  Let me know the results of your experiment.  Play with your food! 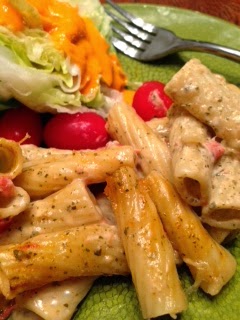