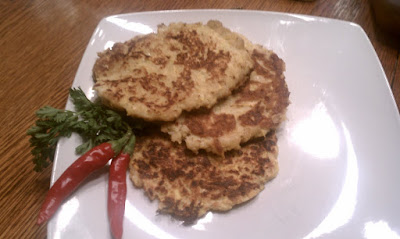 When I think back to summer nights when I was a kid a few specific things stand out in my memory. I remember being so excited when the lightening bugs finally made an appearance. I loved catching them and putting them in a mayonnaise jar with holes punched in the lid. I guess Mom or Dad would let them out, because the next morning the jar was always empty. Still it was a fun thing to do at night. Since we lived in a neighborhood overrun with kids there was always someone to play with. The neighborhood rule was you went in to eat supper then came back out to play until 9 or 9:30. There was something magical about playing at night and there were plenty of kids to play kick the can, freeze tag, or capture the flag.

Supper would have be a dreaded interruption in play time if it were not for our traditional summer stand bys. Dad would cook out a steak occasionally, a burger more often, but most of our summer nighttime meals would have made the most ardent vegetarian deliriously happy. Most night we ate field peas, butter beans or green beans, squash, okra, corn, tomatoes, coleslaw, salad, cornbread and iced tea. We never had all the above, but a combination of some were our standard summer fare. The upside of all of this was twofold. My beloved sister and I could scarf down our food in a hurry and because we had to wash, dry and put away the dishes before going back out to play, veggie night dishes were very easy to wash. There was no sticky or greasy mess to have to contend with. Plus this was before all the high grade cleaners. As I remember we had our choice of Lux, Ivory or Palmolive and not one of them had grease cutters.

I try to continue the tradition of meatless fresh veggie nights during the summer. Not because there is anyone here heading out to play in the evening but just because nothing is better than fresh cooked summer vegetables. Tonight we had pink eyed peas, corn on the cob ( Yes it was Silver Queen!) sliced tomatoes, cucumbers and squash patties. I just did not feel like having steamed squash and searched the internet for something a little more interesting to do with the beautiful squash I got at Andy's. I found this recipe on multiple sites and thought I would give it a go. What a great idea it turned out to be. The patties were moist and flavorful, but also had a very light cornbread flavor. If I had fried them rather than cooked them on a griddle I think they would have been delicious squash fritters, which I will never try because it would be a bigger mess and summertime is not the time to have a messy kitchen. After all who wants to stay in the kitchen and clean when you can grab a glass of iced tea and sit back and listen to the crickets!

2 cups grated yellow squash
1 small onion chopped ( Means grated in my world, especially if the grater is out)
1/4 cup self rising flour ( I cut it to 2 tablespoons because I did not want a thick batter)
1/3 cup self rising cornmeal ( Cornmeal mix)
1 egg, beaten
salt and pepper to taste. ( Here that means a lot of pepper and a little salt)

Grate the squash into a mixing bowl, add the onion ( if you chop it you need to chop it very fine) sprinkle the flour and cornmeal over the veggies and stir lightly. Add the egg, salt and pepper and stir to incorporate everything. The mix should look like thin cornbread with shredded stuff in it. Heat a griddle like you would for pancakes. ( I use the fling water droplets on it and when they bounce it's ready method) Remove the griddle from the heat and spray with Pam ( I found out the need to removing a very hot griddle from the heat. Maybe, just possibly the Pam flames up if things are too hot...Maybe) Using a spoon kinda flop ( technical term meaning more than a spoonful and requiring a little muscle to get it off the spatula) some of the squash batter on the griddle, wait till the bottom edge is light brown and flip those puppies over so they can cook on the other side. Repeat until you are out of batter and serve immediately.

The red peppers in the photo have nothing to do with the squash patties. I had just picked them from our little veggie patch and I thought they were pretty. Hmmmmmm, I wouder how a little chopped pepper would taste in them?

If you like squash you will really like this and even if you don't like it there is a good chance you will find these tasty.

Later
Posted by Anne in the kitchen at 9:26 PM No comments: 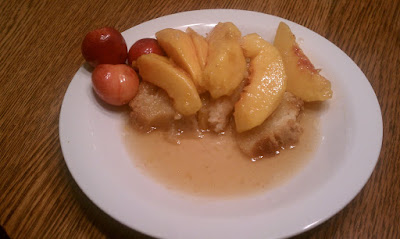 For the first time in weeks I am finally home and actually almost cooking. Well I am cooking only in the sense that we are not eating out. I am not really cooking since Son3 is in Utah doing some jazz stuff

We were in Portland for 9 delightful and delicious days. We got to spend some quality unhurried time with Son1 and Son2, Fortunately for us they like to eat out and knew many places for us to try. My new favorite restaurant is Toro Bravo, a tapas place. My new never before recipe is a take off on the delicious dessert I had there. They serve an olive oil cake with caramelized strawberries. It was beyond delicious.

After we got back in town I did the usual restocking with milk, bread and the essentials you need when returning from a trip. While I was at Andy's Produce Market, I noticed ( smelled) the beautiful peaches and had to get a small basket. Now I love peaches as much as the next guy but can only eat so many. I had a eureka moment when I remembered the dessert from Toro Bravo. I bought a pound cake and thank you very much, I realize I could easily bake one, but it is much easier to buy it. Marta's pound cakes are delicious and as good as anything I could make so I bought it.

I put 2 small slices on a breakfast plate then worked the caramel magic in a saucepan. This is not a recipe from a cookbook but just from years of knowing how to make a light caramel. So here goes an almost original yet Kind of stolen recipe.

Put 1 cup of sugar in the bottom of a saucepan and add 3 tablespoons of water. Cook over medium heat stirring constantly until the sugar turns a light brown. Remember when stirring to clean the sides of the pan. The delicious color and caramel flavor usually comes form the sides so you need to keep incorporating it back into the sugar. Also keep a cup of hot water handy. Sugar, being a crystal likes to return to its natural state. You might need to add a bit of water if it starts getting grainy and if you toss cold water in the pan the entire thing will crystallize and then you have to add more water and cook it for about another 5 minutes to get it caramely again, and who wants to do that? Add 1 tablespoon of butter and stir to mix. Then add 2 peeled sliced fresh peaches and stir to coat the peaches thoroughly. Put the caramel coated peaches over the cake and spoon the caramel sauce over the peaches. Serve immediately. I should have taken a picture of it, but we ate every crumb as soon as it was on the plates.*

The caramel was actually enough for 3 peaches, but there were only 2 of us so we just used the 2 pieces of fruit. I imagine you could do this with almost anything, but for apples it might require a little cooking time in the caramel to soften them a bit.

* The picture was added 2 nights later. We had more peaches and enough leftover pound cake for a repeat!
Posted by Anne in the kitchen at 1:05 PM No comments: