You know how you stuff the freezer with all kinds of things for the winter, then get to summer and most of the food is still there in their nice ziplock flexible coffins?  Well that is the picture of my freezer, and everything needs to be eaten and eaten quickly.  In fact I need to have about 4 major teen guy cookouts to make a serious dent in it.

This morning I took out a package that looked porkish based on the color but I had no idea what might actually be living in the pack.  I only knew it was bright pink and had bones.  Seems some idiot had forgotten to write the contents on the little white space specifically meant to write  and date the contents.  I would love to point the blame at either The Hub or Son3, but it rests directly on my head. ( I am thinking about being the founding member of D.A. Anonymous.  " Hi! My Name is Anne and I'm a..."  Well you get where I am headed with that.  A quick thaw in the microwave revealed it was a package of country style ribs.  That is an oddity for my shopping list, so The Pig must had had a really good buy one day.

Hmmmm,  Not in the mood for barbecue I hit the internet looking for some alternative method thinking I would wind up with some asian inspired teriyaki recipe.  After looking at 20 or 30 slow cooked barbecue
recipes I finally found one that was Swedish inspired.  At least the recipe claimed to be Swedish inspired.

I began thinking about what I know about Swedish food and came up with 3 things: Smorgasboard, Lingonberries ( saw a can at Ikea), and Swedish Fish ( you know those gummy fish candies).  I know myself well enough to know I will learn to make some Swedish daily staples just because I am totally ignorant about it.  I cannot guarantee  these ribs are actually nordic in origin but I will tell you it was different and delicious. 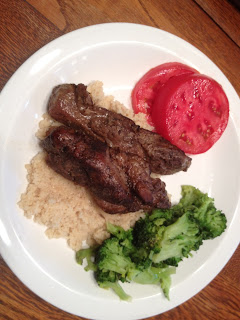 Mix all the dry ingredients to make a rub, and rub into  the meatiest side of the ribs.  Let sit at room temperature a few minutes.  In a large skillet, heat the butter to a mid high temperature. Brown all the ribs.  When browned pour the beef broth over the top and cover with the pan lid.  Reduce temperature to a simmer and let it cook away for 1 1/2 hours.  Do not remove the lid while it cooks.  Serve over rice/pasta/mashed potatoes or whatever your personal favorite starch is.


Even though this is a very simple recipe I did change a few things.  I thought brown sugar would be a little nicer flavor but I didn't have any.  I did have some raw sugar so I used it instead of the white.  The allspice was cut from 2 teaspoons to 1 and I used homemade beef broth from the freezer.  I used 5 ice cubes worth  which is roughly 1 1/4 cups.  It was slightly seasoned with celery tops and thyme and could have altered the finished food a tiny bit.  I served it over couscous with a side serving of broccoli and sliced tomatoes.  Nothing more was needed.

This was a unanimous hit at our house.  Son3 asked to have it again soon.  The Hub scarfed his down.
I ate mine slowly ( mainly because Son1 called after about the first 2 bites).  I will do this again and again.  The ribs were not sweet like a barbecue would be, but were slightly sweet, somewhat spicy, and had a little peppery bite.  It was really a pleasant  surprise.  Try it, you might like it___a lot!


Posted by Anne in the kitchen at 6:59 PM No comments:

Not Eggactly What I Wanted

A few days ago I was looking for something a little different for breakfast. Often I eat a salad just because it allows me to choke down a couple of vegetable servings and then have less guilt if lunch is a sandwich on the fly and a diet drink. This particular morning I had nowhere to be all day so the issue about lunch was not even a problem, but I decided to eat the salad anyway. I thought it needed a protein and looked through the fridge for the ever present leftover chicken, beef, fish or whatever, only to find there was none. Looking through ideas on the internet there was a different spin on the traditional salad. It was a breakfast salad that the recipe originator claimed was the best one ever! Fine! I'll Bite!

So I started prepping this different salad. I should have known when it called for a soft boiled egg that this was not the recipe for me. I should go on the record saying " I just don't like eggs" I will eat an omelet on occasion or a few bites of scrambled eggs, but the lowly egg is never, ever, not in a million years a comfort food for me. You will notice with the above mentioned ways there is no mention of any runny yolk variety. Probably because I do not enjoy a soft yolk or the white either. Enough said about my personal taste.

Mix the cucumber cubes with the tomatoes and peppers. Pour the oil over the top and add the vinegar. Stir to coat and let sit while the egg cooks. When the egg is done (boiling for about 2 1/2 minutes at my personal homes altitude) add the lettuce and toss until it is coated. Top with the soft boiled egg and the cheese. Salt and pepper to taste and sprinkle the seeds on top of the salad. Cut the egg and let the yolk run over the greens tossing again to coat everything. Enjoy???????

I made the salad but not really as it said. First I had no lambs quarter lettuce in the crisper, and no goat cheese either ( which honestly is something I keep on hand, but had used just prior to this) I substituted a mix of romaine and iceberg lettuce and used crumbled feta in place of the goat cheese. Also I am from the south and we do not see cucumber seeds and tomato seeds as bad things so I left them in. I think I cooked the egg a little too long. The recipe called for cooking it for eight minutes before I realized it must be someplace with a much higher altitude, for an 8 minute egg is a hard boiled one here. The yolk on my egg was a little thicker than it should have been. The verdict? I did not like this at all, but I am not an egg person. The flavor was quite good but I could not get past the yellow yolk coating everything. It is not something I will try again but if I made it for someone else the egg would be poached instead of soft boiled. It would be a prettier presentation and should be a little better flavor since the whites on a poached egg are softer. The rice vinegar did not enhance the dish. It would probably be tastier with champagne vinegar instead. If you are an egg person some toast points would be a good addition to the meal. I only ate about half of mine and then just couldn't get past the idea that I was eating eggs. If you like eggs try it. If not, DON'T!
Posted by Anne in the kitchen at 10:28 PM 1 comment: