And so it begins: Week 1


Because the year officially ended on Friday and my 2021 posts were from Friday to Thursday  it left The NYE post either as a solo post or it. had to be included in the first week of this years joys. I did not want the day to have an inferiority complex nor did I want it filled with self importance that might come from getting a post all its own. My solution was to combine it with the first week's post and now all the days of the year will share equal footing. For the rest of the year, the weeks will be Saturday- Friday.
Friday: TheHub and I did a little NYE  morning running around, buying a few things for NYD. We came home in time to watch one episode of Succession then had a call from Son2 that they were headed over here to watch the Alabama Cincinnati football game. Alabama won and we were pretty happy.
Other than that,] I did do several things I do every NYE.  First I can't go into the new year with dirty clothes, so I made sure all the laundry was done. I also have to have all dishes done, the kitchen cleaned and mopped, clean sheets, beans soaking for NYD and something cooking on low in the crockpot. This year I decided it would be bone broth, so I had 2 crock pots filled with chicken bones, water, salt and a dash of vinegar. I planned to get 10 more pounds of chicken quarters (on sale at The Pig) and to make more Monday (because it has to simmer for about 2 days)
Saturday: New Years Day came and went with little fanfare. TheHub and I watched bowl games then had our "lucky" traditional NYD meal between games. Arrrrrgh, new leftovers!
After the daytime games we watched a couple of Succession  episodes. We  both wanted Veggie pizza. I know I could have made it but we had a coupon and Marco's has the best thin crust out there!
After our quickie meal, it was time for The Sugar Bowl. I do love college football, but I will be thankful on the 10th when it is over for the year!
Sunday: Woo Hoo, TheHub and I finished season 3 of Succession! Now we have to catch up on Billions (season3-5) because one of Son3's former roommates has been cast in the upcoming season. We have only met Tony twice, but I have spoken to him several times while talking with Son3. I am not sure if he is in the second half of season 5 or in season 6, but we wanted to get caught up just in case. 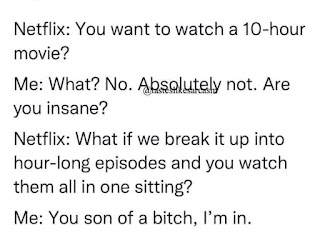 Other things happened Sunday, but nothing excited me more than finishing Succession without hearing any spoilers. Now we have to wait another year to find out what new treacherous acts the Roy family members  have in store for each other.
And an unexpected huge joy__snow!
Monday: Of course the snow did not last, but I was able to wake and have coffee while looking at it. You know how it's the little things that make us happy?
The Pig's free Monday item was a dozen eggs (with an additional 10 dollar purchase) . As if free eggs alone was not worth celebrating I needed a few items anyway and while I was getting them, I found one grocery item that was a true impulse buy.  But once I saw it I could not pass it by. I bought T.O.E. Jam. It is a tangerine, orange, elderberry jam which might be really good or really bad, but when I saw the label I knew it was coming home with me. I am counting it as part of my fun for the day!
I also had a brief visit from My Beloved Sister and we had a couple of laughs which is the best medicine out there.
Tuesday: TheHub works in the medical field, and gets daily reports on the numbers of patients seen at each of their clinics. Though this is not a true joy there is something joyful about knowing how things are tracking. And they are not tracking well here. Positive Covid numbers have to be reported to the CDC daily. You know things are tanking when the CDC calls because they thought the number of actual positives might have been a clerical error. No such luck. But at least I know to keep my butt at home whenever it is possible and to mask and hand sanitize when I am out.
When TheHub got home (but not until he got a covid test) we watched another episode of Billions.
Wednesday: My Beloved Sister and I had a conference call with the investment company Mom and Dad did business with. Things were to be divided equally, but they had everything set up in a specific manner so the divisions are a little complicated. We spent nearly 2 hours on the phone with one of their "specialists" to try and divide a small checking account (one we did not even know existed). I know the expert is very young, but I do worry about the future of our country when an expert cannot mentally divide in half $2,090.53. She was trying to tell us a 50/50 split would be $1,056.30 for one and 1,034. 23 for the other, with us telling her it was 1,045.26 to one account and 1,045.27 to the other. or she could just toss all the change into either. She finally got her calculator (?) and decided we were correct. And this is why rote memorization serves you so much better than math "strategies".
After the call that lasted forever, we warmed up the chicken lemon soup, ate together, then had a ton of laughs.
Thursday: Again I was going nowhere so the day was pretty uneventful and really dreary. I spent the morning over coffee while reading at the kitchen table. As I was reading I kept seeing a lot of motion out the window, looked out and saw one of the redbud trees covered with different species of birds. In about 20 minutes they had stripped all the remaining seed pods off the tree. I quit feeding the birds several years ago because the cat next door thought my bird feeder was his bait. He has not figured out seed pods on the tree function the same way. I am glad about that!
BTW Save Me The Plums by Ruth Reichl (former editor of Gourmet magazine) is a fine read.
Friday: The day was as glorious and Thursday had been dreary. I got things done in the morning, ran some errands, bought groceries and had just come home and sat down to eat my lunch (late lunch) when I got a phone call  from Sluggy!  It is such a treat to talk to her. She was talking about France while I was eating French Fries. Coincidence?
She told me about their small snowfall__about 3 inches. Three inches of snow would shut my entire city down!
Though I missed the sunrise Friday and was not at our usual sunset watching spot,  I could see the gorgeous apricot colored sky from my kitchen window.
TheHub came home a little earlier than normal, so we watched an episode of Billions while dinner cooked. After we ate we watched another episode, except one of us fell asleep midway through. Guilty!
As you can see the first week of the year went by with little excitement (My sister's visits and Sluggy's call were the exceptions) but it is just the first week!  Revivng my engines  and looking forward to week 2.
Look for your joys, they are there even in the short winter days (or long summer days, depending on your hemisphere)
May all your weeds be wildflowers!
Anne
Posted by Anne in the kitchen at 6:30 AM