What I've Been Doing Instead of Writing about Cooking

First and foremost, I hope everyone had a wonderful Christmas day and is continuing to enjoy the holidays. I know we had a great, but subdued day. I remember when the kids were younger and we still had two families to see each Christmas, and how I wished we were a little less stressed on Christmas day. Several years later when the older sons were grown and living across the country, and experiencing some family member's deaths, I found what slowing down on Christmas day was like. To be honest I would give anything if everyone were with us and we could still be in a state of Christmas chaos. I guess the old axiom about being careful what you wish for is true. This year my family came over for brunch as they usually do, and we were able to Skype with Son1 while eating. It was nice but still nothing like everyone being there early then having to hurry up to move to the next event.


I would love to tell you all the new things I tried for brunch, but I mostly keep the traditional tried and true recipes we have loved for years. I got a new toy right around Thanksgiving and couldn't wait to play with it Christmas Eve. It was a new crock pot. It really is 3 crockpots in one. It is a long base with spots for 3 different crocks, each with its own control . This year I planned a traditional breakfast casserole, cheese grits souffle, broccoli dip over cornbread, ham and assorted goodies. The grits souffle and the casserole were all prepared before we went to sleep and we woke to the most delicious smells coming from the kitchen. The casserole was perfect and all I had to do to it was turn the control to warm to keep it at serving temperature. The cheese grits souffle was another story. I stuck a spoon in to stir it up and found the grits had all sunk to the bottom into a type of corn cement, while the eggs and milk had cooked into some sort of congealed mess that looked like it might have been used for a sci-fi film's alien guts. Meanwhile all the butter had migrated out of the crock and was living underneath it in the well containing the sealed ( thank heavens) heating element. Fortunately I had plenty of grits and after scrubbing out the pot and sopping out the melted butter, I still had time to remake the grits souffle in the conventional oven. I did cook it in the crock so it was able to go straight from the oven to the heating element where it stayed piping hot until mealtime. The one and only new recipe I tried was the broccoli cheese dip.

2 1/2 pound bricks of velvet. One plain and one mexican flavored
1 pack chopped frozen broccoli
1 can cream of chicken soup
1/2 cup sour cream
1 teaspoon hot sauce ( adjust to personal level of heat. we need more but some need less)
garlic salt to taste
1 teaspoon Worcestershire ( I omitted this because it sometimes overpowers the other flavors and I wanted cheese and broccoli to be the dominant flavors.

Put everything in a crackpot on high heat for about 1 hour. Stir and reduce heat to low for 2 more hours. Serve with toast points, over cornbread or with Frito scoops. 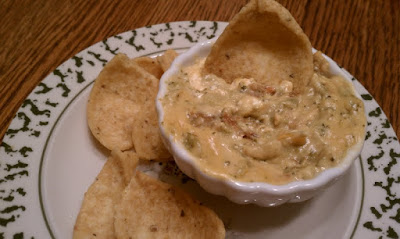 It was all very good but nothing new. One of the goodies I cook each Christmas was a bigger hit than it normally is, and I have no idea why because it is on the dessert tray each year.

Butter a 9x9 square pan and set aside

In large pot combine sugars, syrup and evaporated milk. Cook on medium until it reaches a soft ball (235ish degrees on a candy thermometer). Cool 10 minutes then add vanilla and butter. Beat for 2 minutes then add pecans. Continue beating until mixture loses its gloss. Pour into the prepared pan and score the top of the candy into pieces about 3/4 square. Let cool then continue cutting the candy into individual pieces. This stuff is rich but delicious. Store in an airtight container and it will keep for several days.


I would love to pretend like I had just tried this but I have been making it for 20 years. If you put it in a pretty box it makes a dandy food gift. There are no pictures of the praline fudge because like I said, it was a popular food item this year and disappeared before I thought to take a picture.


I really have tried some new and different things lately but I just got caught up in the holiday prep and didn't write about any of it. I have a few pictures I took along the way which I will post along with the inspiration for the dish along with reactions about them.

One night, I needed supper to be ready to eat in about 15 minutes and needed everything in the recipe to be on hand. Sometimes I get really technical when I google recipes and type in something like delicious quick chicken recipe. Most of the time the first recipes call for cream of something soup and I totally ignore those and look on to something else. This time I found a recipe that not only looked fast, but actually seemed to be a seasonally appropriate dish. 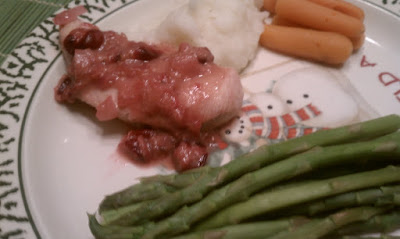 What I did differently.

I used chicken tenderloin pieces rather than whole breasts and used 7 tenderloins for all of us. If I am going to simmer in liquid, I never coat with flour first, but that is just a personal preference. Saute the raw chicken in the pan until it is lightly brown on one side, flip and cook to the same light brown on the other side. Remove and saute the onions ( though I used shallots cause I had 2 that were about to ruin). Toss in the sage and I also added a few shakes of savory to the pan, then add the chicken broth and the chicken along with the vinegar. I had no craisins but I did have fresh cranberries in the fridge so I used 1/4 cup ( I probably should have used slightly less then 1/4 cup) and let them cook until they popped. Since I had no sweet potatoes or winter squash I booted that. When the berries were soft I added the dijon and served with a side of garlic mashed potatoes, cooked carrots and asparagus. Everyone loved it, but by using the fresh berries the sauce was pinker than it would have been with dried fruit. It was a big enough hit that Son3 asked if we could have it again. I call that successful!


Sometime before Christmas TheHub came home from work with a 5 pound bag of raw peanuts. I thought of making peanut brittle but just didn't want to go to the effort of cooking it, but I had to do something with those nuts. I quickly googled recipes using raw peanuts and of course most were for varied kinds of brittle. I kept looking and found a quick and simple recipe for spiced peanuts.

In a nonstick pan toast the peanuts for 3 or 4 minutes until parched but not burned ( through trial and error there is a fine line between the two).

Put the peanuts in a small bowl or pot ( DO NOT USE PLASTIC...another trial and error)

In the same hot pan add the sugar and stirring constantly over a medium high heat melt the sugar and let it come to a light caramel. Stir in the spices and salt , then pour over the peanuts. ( See now why plastic is a bad idea?) Stir like mad to coat the entire cup of peanuts and pour on a plate to cool. Break into small bits when completely cool. These things disappeared about as quickly as I could make them. I think I have made 5 batches now including one that I made just sugared with light salt and no spice.

There are a couple of other things I made recently but it has gotten late and I am tired so I am going to have to wait till tomorrow to write about them. Plus! Did I mention I got a waffle iron for Christmas? I found a recipe for ham and cheese waffles and I have a boatload of leftover ham!

Till tomorrow, maybe?
Posted by Anne in the kitchen at 9:39 PM No comments: