Friday and All That Jazz

The nicest thing about doing this jazz post is my relationship with the first featured player.  For those of you who may not know, I gave birth to this fellow 24 years ago, so I know him fairly well and could have done a reasonable job without involving him. Even so, I sent him the questions I will ask everyone else.  For the sake of a true q and a, pretend I don't know him and I will pretend like  I am surprised by his answers.


This week's featured jazz artist is Red Hawley (even though I still call him Will, or either of his brothers names, 'cause yeah, I am a mom and I do that.). He was given the nickname Red because his beard grows in a bright copper color, in spite of being a natural blond. The name stuck and the beard, (which covers his cute face ) is still red and it grew. In previous blog posts he is most often referred to as Son3, because he is the last of my 3 sons. He currently lives in Washington Heights in NYC and works as a musician/ trombone teacher. 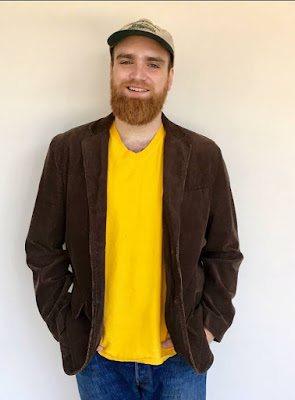 Where are you originally from? Vestavia Hills, Alabama. Quite far from where you currently are :p. (Smart aleck comment since he knew I was sitting at the kitchen table at home)

What inspired your love of music? My mother and brothers! I was surrounded by almost every type of music imaginable as a kid. Looking back now, I'm not sure how I ever thought I would be anything other than a musician.


How old were you when you first began playing an instrument and what was it?  I believe I was 5 years old playing the piano, but I've been picking at the keys for as long as I (and others who raised me) can remember.

What is your instrument of choice and how many different instruments can you play? Trombone is my primary instrument (as of now). I can also play piano, drums, euphonium, tuba, and a little bit of saxophone.

Tell me about your music education? My music education started at home with my family. All of the music that went through my ears set me up for a lifetime of diverse music. But I started official piano lessons at 5, then at 12 started playing the trombone in Middle school. In 2012 I moved to New York City to study Jazz at The Juilliard School from where I graduated in May 2017.

What inspires you when you are writing a song? This is a tough one, because inspiration comes from so many things. I've written songs inspired by sorrow, pain, and loneliness; but also from love and joy. The song that I have sent was inspired by a soccer chant from a team I support (New York City FC!).

Besides jazz what is your favorite music? I really love so many different types of music. If I had to pick something other than jazz right now, I'd have to pick 2. (1) Cuban music. Buena Vista Social Club is one of my favorite albums, and also Juan de Marcos' Afro-Cuban All-Stars. The 2nd one I would says is funk/R&B from the 70's. Anything from Parliament-Funkadelic, Bootsy's Rubber Band, Curtis Mayfield, The Stylistics, Marvin Gaye. I'm so infatuated with the 70's in general and especially the music.

What is your favorite or most painful music memory? My favorite music memory is a tough one. I’m going to go with a moment that really showed me what the New York jazz scene is all about. 3 or 4 days after I moved to New York, I got called to sub at a sound check for the Ron Carter big band. Ron Carter, the most recorded bass player in history (certified by Guinness book of World Records). From playing with names like Miles Davis, Herbie Hancock, Freddie Hubbard, even Paul Simon, and A Tribe Called Quest.
So I show up to the soundcheck at The Jazz Standard; in a colorful button up shirt and white pants - a stark contrast to the generally black and green ensemble of the band. The first song was “The Eternal Triangle” and it was played at a BURNING tempo. As the tune is counting off, somebody says to me “watch bar 123, it’ll get ya.” And get me it did. Baptized by fire in New York.

If you were not a musician what would you love to be doing? I think I'd love to be a teacher if I couldn't be a musician. Somehow I've managed to find the best of both worlds!

What is your favorite food or what food do you think of when you are listening to the song you sent? Hmmm this is a tough one. Since I've moved to New York it's really hard for me to find comfort food like I could in your wonderful kitchen :).  I'll say my favorite food is a plate of pulled pork with collard greens, fried okra, and mac n cheese.  What I'm thinking when I play the song I sent? I'm thinking about a pollo con queso empanada from Empanada Monumental; a New York City empanada shop.

Where do you see yourself in 10 years? Who knows! I think I'd most like to be able to live someplace comfortably and play music that I love.

Any cd's or ep's available?: I just recorded my debut album. I'll be releasing it by the end of the year. Check redhawley.com to stay in the loop, and follow me on social media! Facebook: facebook.com/RedHawley. Twitter: @redhawley. Instagram: @redhawley.


"Why Bag" written by Red Hawley

I do not make empanadas like he mentioned so I am sharing the recipe for our favorite homemade empanada. Trust me when I tell you Will has eaten more than his fair share of these.
Picadillo Empanadas 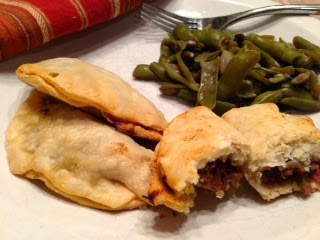 (I forgot to take a picture of there before most of them were gone, so all of the pretty ones were eaten. These are the Old Maids that were left behind. Sorry!)

Picadillo
2 pounds ground beef
1 cup finely chopped onion
2 bell peppers, finely chopped
5 cloves garlic, minced
1 teaspoon oregano
3 bay leaves
5 tomatoes peeled and chopped in a small dice ( can substitute 2 cans diced drained tomatoes)
1 teaspoon cumin
1/4 cup raisins minced
1/4 cup pimento stuffed olives, minced
1 tablespoon white vinegar
1/2 cup burgundy
In a large pan, cook the ground beef until it loses its pink color.  Add the onions and peppers and cook until they wilt but are not browned.  Add the garlic and cook until it is golden. By now the beef should be browned.  Tilt the pan and, with a spoon, remove as much of the beef fat as possible.  Add the remaining ingredients except for the burgundy. Cover the pan and cook on mid low for about 20 minutes.  Add the burgandy and cover the pan again.  Cook for about 20 more minutes on low.
Traditionally this is served over rice and it is delicious that way, but in empanadas it is almost to die for.
*Pie crust (2 crust recipe)
Heat the oven to 350 degrees F.
*For 25 empanadas it takes enough dough for 4 pie crusts so you will need to double this recipe if you want that many.  I don't re-roll the cut pieces  more than once because it gets tough.
2 1/4 cup flour
1/2 teaspoon salt
3/4 cup + 1 tablespoon shortening or lard (I use half shortening and half lard)
about 1/3 cup ice water
Preheat oven to 350 degrees
In a medium bowl stir the flour and the salt.  Cut in the shortening using a pastry blender or 2 knives until the mixture resembles cornmeal.  Add about half of the water and blend it with a fork. Add the remainder 1 teaspoon at a time using your hands to work it into the dough.  Stop adding when it feels like a nice consistency pastry dough.  If it requires a bit more add it. Pastry dough is not a precise recipe so you have to go by touch.  If it is too crumbly it will fall apart and if it is too wet you can't roll it well.
When the dough feels "right" and gives a bit when pressed, put it in a covered bowl in the refrigerator for about 20 minutes.  On a lightly floured board or pastry cloth roll the dough out to pie crust thickness.  Try to roll it in a rectangle for less waste.  I use a large yogurt container to cut my dough into circles.  It is about 3 inches in diameter, but I have made them smaller for appetizers.
To make the empanadas
On a large cutting board or cookie sheet lay out the cut dough circles. With a slotted spoon place about 1 tablespoon  and a half of filling in the middle of each circle, being careful to get none on the edges.  Fold over the top half to the bottom half and crimp the edges. ( You will have half moon shapes with crimped edges.) Transfer these to a clean baking sheet. ( I spray a very light coat of Pam on the baking sheet)  As long as they are not touching you can put as many as you can cram on  your sheet as there is virtually no spreading when they cook.
Bake for 15-20 minutes or until the pastry is dry and lightly browned.  Serve and enjoy!

Side note: This makes a boatload of filing. Freeze the leftovers in 2 containers, label it then thaw it to make more of these on another day or serve it over rice. It is delicious both ways.
Posted by Anne in the kitchen at 9:34 AM