Confession: It's Good for the Soul, Right? 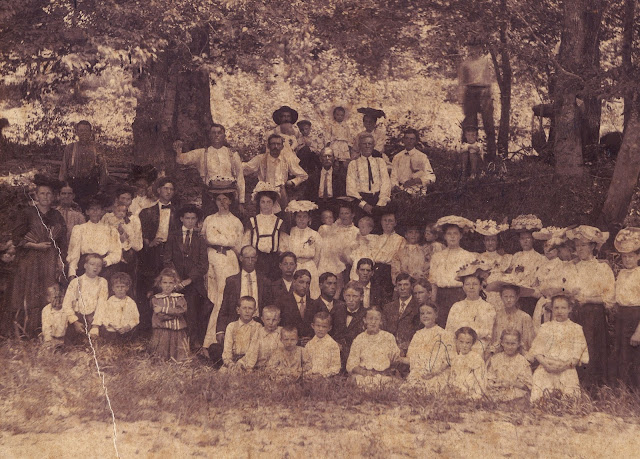 This is an actual photo of the "originals" back in the early 1900's.  I am not sure of the exact date but this is The Family.

I probably should not have started this 200 dollar challenge until the beginning of September because of a couple of outside commitments we have known about for quite a while (Since last year!).  Our family has a reunion every year the Saturday before Labor Day which is always lovely, and this year was no exception.  I also have relatives who come from out of state and they usually fly in the day before.  I have bedrooms that are not in use and they are always open to whomever needs a bad.  This year my lovely cousin Kathryn, (she is truly lovely both in the physical and in her wonderful personality) her husband and adult son stayed with us. Every year on Friday night prior to the Saturday event we have some sort of dinner here at my house and we laugh about shared stories and memories. (We may or may not have a nip or 2 which may or may not make us a tad more boisterous)

Long story short: I definitely did not have enough in the budget for the Friday dinner plus food I needed to prepare for the family event, so I decided a compromise was in order. I would use what I had frozen and would not purchase anything specific for either day, except for dessert.  I was having 14 people over for dinner and did not want to heat the house up by turning the oven on.  The Pig had 14 layer cakes (7 layers of cake and 7 layers of icing) on sale for 6 dollars each so I bought 2 of them.  (One for the diner here and one to take to the reunion on Saturday).  Since we would not use them as part of our meal plan ( TheHub's  and mine) I put them in the T&E budget

When talking to my other lovely cousin Sally, she asked if she could bring some takeout.  Of course, so she stopped by a local restaurant and picked up a pan of lasagne, salad and rolls. All I needed  to make was some appetizers and I had bought the cake for dessert, plus I needed tea and some assorted adult beverages. MyBeloved Sister gets bottles of wine each year from people she does business with and rarely drinks it, so she donated several bottles, plus my other cousin, Sandy, brought a couple of bottles.  Jack and Bette are white wine drinkers and brought theirs already chilled, and Fran and Pete brought their favorite Scotch. Rick's son had given him a case of beer and he shared a good bit of it.  Our liquor cabinet remained fairly untouched except for the pineapple infused vodka I made a while back which everyone seemed to like.

For the apps I grilled 3 pounds Conecuh sausage (which I had in the freezer) cut them into thick coin size pieces, then made a dipping sauce of melted raspberry jam and hot jalapeno jelly (both were hanging out in the fridge). I had a package of cream cheese also and mixed it with about 1/4 cup of dried cranberries (the last of them) a couple of tablespoons of minced fresh rosemary (compliments of Otis, my rosemary plant, that thinks he is a tree) and a couple of tablespoons of walnuts (the last of them also). I had 4 boxes of  various crackers, all previously opened with varying amount so I tossed them on a platter with the cream cheese spread. Then I brewed tea for those who wanted it and had a pitcher of lemonade. (I think only 2 people drank it but it was here nonetheless)

Dinner was very nice and we missed those who couldn't make it!

I took picadillo (3 quarts I had previously frozen) over rice, cauliflower casserole (using frozen cooked bacon, cheese from the freezer,  and kefir instead of sour cream (I make kefir daily and just let this batch sit a little longer).  I did have to buy the cauliflower so I included it in the budget total. I also took some cornbread (We are out of cornmeal so I had to use corn flour instead and a little kefir instead of buttermilk) and the chocolate cake. (See above and the T and E budget)

My total expense was 14.50 (12 dollars for 2 cakes and 2.50 for the cauliflower, but like I said, I am tossing the cake prices in the travel and entertainment budget and we will just have to be homebodies for the next 2 weeks.)

And another 2 confessions:  1.TheHub's cannot take his lunch with him to work.  He eats out daily but due to the nature of his job he is either taken out by people trying to do business with them or he and 2 others eat together and discuss business strategy over lunch while the company pays for it. I suppose it is considered a perk and sounds great in theory but it really means he has zero down time during his work day. (He is at work before 7 and never leaves until at least 6:30 so his days are long with no breaks.)
2. He also has several dinner meetings a month, and last week he had 2, which meant I mostly only had to come up with a dinner plan for one. When it is just me I will eat whatever, so I barely cooked at all last week. We have most of the food I bought left for the remainder of this week and it will carry forward into next week.

We will be at the lake place for the long Labor Day weekend and will eat in the entire time.  I will not only be cooking our regular meals, but SEC football (Roll Tide Roll) will be on all day Saturday which means I will need to come up with some really good game day treats, as well as bbq for Labor Day. As I mentioned earlier, I still have a good bit of the food I purchased last week, so I am carrying it forward

Posted by Anne in the kitchen at 2:46 PM