I Almost Could Have Died,Today 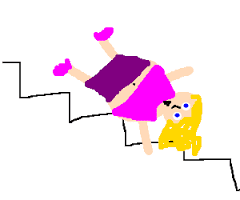 This afternoon while innocently walking from the den into the kitchen I was viscously attacked by Shelby The Dog.  Ok maybe viscously attacked is a slight overstatement, but she did stick her humongous paw out as I walked by, then moved as I stepped on that humongous paw.  As a result I tumbled in slow motion landing on my hip right as my face made contact with the door frame.  Know what happens when you are injured with 2 adult sons watching? Intense laughter! In their defense they did wait until they were sure nothing was permanently damaged. Son2 even said "Go for the jugular Shelby, like we practiced".

Then I called My Beloved Sister and relayed the details of my harrowing event.  She listened for a minute, was silent, then burst out laughing like my sons. Especially when I told her one other thing Son2 said to me today "Well one thing you haven't lost as you've gotten older is your sense of grace". I am having a Rodney Dangerfiled moment here!

And this is why I know when it comes time to get nursing home care, I will wind up in the cheap one that smells like urine.

*As I have been told all night, I have slow motion falling down to an art form.  Just glad neither had their phone near or there would have been video evidence of said slo-mo.
Posted by Anne in the kitchen at 4:19 PM