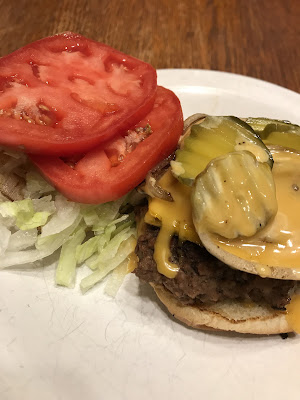 A few weeks ago I was looking at an article about new restaurants opening in the Birmingham area and saw Slutty Vegan is supposed to be opening this year. Woo Hoo! An alternative burger joint is always a welcome thing and with a name like that, well to say the least, it's worth checking out. So I did a not so deep dive (It seems like everyone who has ever been there loves the place) here and decided it would most likely be somewhere we would try. My next trip was to a couple of Youtube videos where folks were making a copy cat version of their burgers.

Serendipitously, Publix had Impossible Burger BOGO for the week. I figured the universe was directing me to give it a try, so naturally I did.

This is my take on the Fussy Hussy burger. I did not have access to Slut Sauce (their secret sauce) but I had The Pig's dipping sauce which looked similar, so we used that. (It was not vegan, but I am not vegan so it did not bother me that the sauce had egg yolk as an ingredient). I did buy vegan cheese, though, to keep things as accurate as possible.

1 pack Impossible Burger (serves 3)
Angelo's steak seasoning
Vegan cheese shreds
1 small onion, sliced
1 tomato, sliced
1/4 head iceberg lettuce, shredded
dill pickle chips
hamburger buns
Spray a non stick griddle with your favorite non stick spray (critical). Put the onion slices on the griddle to begin the caramelization process. You need to start this about 30 or so minutes before you plan on cooking the burgers. Cook on a medium low heat until the onions are soft and caramel colored. Remove from the griddle. Spray the pan again. Make 3 patties from the Impossible Burger. They will be very close to the same size once they are cooked so do not worry about much shrinkage. Season however you choose. Angelo's steak seasoning is my go-to beef seasoning. Put the patties on the griddle on a medium heat and begin the cooking process. I cooked them about 5 minutes, then flipped them to finish cooking for maybe 3 more minutes.  As soon as I turned them, I topped each burger with the vegan cheese shreds so it would melt on the burger.
I put the buns (2) on the griddle along side the patties so they would toast a bit while the patties finished cooking. When everything was done I spread the sauce on the top and bottom of each bun then layered the cheese covered burger, onions and pickles on one side of the bun and the lettuce and tomato on the other.
This is very much like a beef burger, and was a delicious alternative to meat.  The consistency is the same as ground beef, the taste just slightly different but not anything to be off-putting. The only real con was that it was very messy. We wound up using a knife and fork after the first couple of bites. I did notice when looking at photos of people eating the real burgers, they were served in a paper lined foil wrap. I understand why now.
I can't wait until they open here! We will be in the first wave of customers! Yes it was that good!
Posted by Anne in the kitchen at 4:01 PM