I have been trying to learn to do things that I seem to have never wanted to learn before.  (Take, for instance, pressure canning)  I have no clue why I feel the need to know how to do some of the things my grandmothers took for granted as necessary chores.  With the advent of commercial canning and freezing not to mention convenience foods we are more reliant on packagers than ever before.  I figure I just don't like having to rely on large food cartels to feed us.

I purchased a canner then realized I have absolutely no idea how to use it. Instead of reading the directions right off the bat, I googled pressure canning. BINGO!!!  I found a bunch of women who have videos on Youtube canning everything from butter to goat meat and all things imaginable in between.  After I watched about 20 canning videos, I realized these ladies also have multitudes of video recipes.  I am hooked now and visit them daily to see what new food they are making.  Most of the dishes are not complicated  but many seem worth a try just for a different way to sample some down home goodness.
So thanks to Imstillworkin, The Mrs. Volfie, Perbain,  Noreen's Kitchen, and Katzcradul for teaching me to can and sharing your recipes.

This particular dish comes from  Katzcradul.  As usual I changed things a bit to suit us, but I certainly did use her video as the bones for the meal.  Many Thanks to you!

Haluska ( I am trusting this is the correct name.  I haven't really jumped in the polish food pond before)

Slice the sausage in bias slices, heat in a skillet and keep warm.
In a dutch oven or large pot add the butter and oil till it sizzles.  Toss in the onion and wilt well, then add the cabbage.  Cook until the cabbage is wilted and starts to lightly brown.  Add the water and the uncooked noodles.  Put the lid on and cook stirring every few minutes.  If the water cooks out and the noodles are not finished cooking add 2 additional tablespoons,  and salt and pepper to taste.  When the water is gone and the noodles are cooked stir in the sour cream and mix well.  ( I put the sausage in the cabbage and mixed it.  I will not do that again.  Just spoon slices over the top of the cabbage noodle mixture)  Plate and sprinkle with Hungarian Paprika.  Smoked  Paprika would probably have worked well also.

Believe it or not this was delicious.  With the sour cream mixed in, the cabbage and noodles have a very smooth consistency . They almost melt while you are eating them.  I think other than the sausage I mentioned earlier the only thing I would do differently is use a LARGE red onion just for the color variance.  Without the paprika the dish would have been visually just a blonde mush. 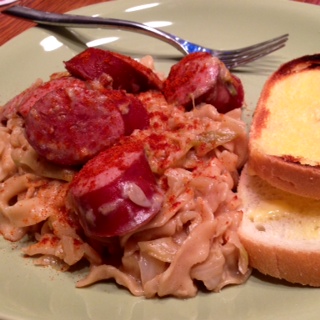 Great way to incorporate large amounts of veggies in a single serving!

As you can see we had it with toast.  I successfully managed to burn one slice and undercook the other on the same cookie sheet at the same time.  Talent!