Who'd a thought it 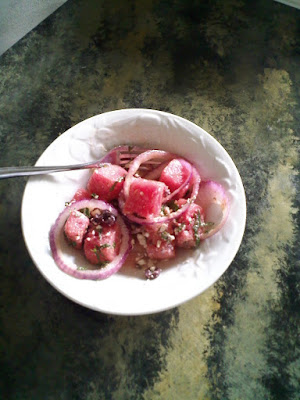 A few nights ago The Hub had to have a working dinner at Bottega's ( WAH!) and came home talking about this salad he ate, and swore was delicious. He could only remember a couple of things in it, but assured me it was fabulous. I listened as he named off the 4 things he could recall seeing in the salad...Watermelon, Olives,Red Onions and Feta Cheese. Now normally when I hear a combination like that I would just consider the person "not quite right in the head", but this was The Hub and I do know him pretty well. In fact with the exception of his actually eating bananas we like the same things. So I started my search for what else might be in this odd mishmash of ingredients. It took very little to find something online that was at least close to what he recalled. I found it at ALL RECIPES and it is just aptly named "Watermelon Summer Salad"

As you all know it has been insanely humid lately, with a touch of heat thrown in. Yesterday was just such a day and The Hub and Son3 had been working in the yard. They came in and took a shower but were still overheated and hungry, but nothing really sounded good. Ah...watermelon to the rescue. I whipped up the salad in about 5 minutes and served us a big bowl full.

In a small bowl squeeze the lime juice over the onions and let sit for about 10 minutes. In a large bowl combine the watermelon, feta cheese, olives, mint and the onions in lime juice. Drizzle the olive oil over the ingredients and toss gently.


What I really did.

I used all the ingredients more or less but altered a few things. First off, I went to Publix and bought one of those little tubs of cubed watermelon. I bought the medium size on which is about 2 cups. I used a half of a red onion and did slice it very, very thin. I have no idea how much lime juice I used but squeezed 1 whole lime as dry as could. I even added tiny bits of the pulp because I thought it would taste good. I used kalamata olives because I like the fruity flavor a little better than the black one in the can, and those were my only options. I sliced them because I wanted a taste of olive in each bite. I have no idea how much mint I used. I just went outside and grabbed a few leaves ( maybe 10?) placing one inside the next, rolling them like a mint cigar and slicing it into thin ribbons ( a chiffonade if you are a geek like me and like to know the correct terms) As for the cheese, well I did not measure but used maybe 3 tablespoons. (Does anyone actually measure salad ingredients?) I liberally sprinkled the olive oil and tossed the barest I could to incorporate the ingredients without breaking the cheese. I topped it off with a medium dusting of freshly grated black pepper.


I had no idea something so odd could taste so wonderful. It was a mouth explosion of sweet and salty with the cool mint thrown in and then you would grab a little "bite" from the onion followed by the mild pepper heat. Each bite has some crunch and squish which just added to the overall experience. I know the word fantastic is overused but it was Fantastic with a capital F. My only regret was that I had made only enough for a bowlful each. The Hub and I were both sad there were no seconds because we would have eaten more if we had it. I am sure there is a way to make this better but I will never try. I will serve it as it...lots.

For those with picky eaters, I suggest having a peanut butter sandwich as a back up plan. Son3 eats no fruit and was not about to touch this. In fact he did not want to even sit at the table while we inhaled it. His loss was our gain, at we did not have to share with him.

I guess you just have to trust me on this. I had no idea such odd pairings could create something so incredible. Son3 will not be here for supper tomorrow so it might be watermelon salad time again!

Peace and watermelon!
Posted by Anne in the kitchen at 7:26 PM