What Hot Place Is Freezing Over Tonight?

Wow! I don't know what to do right now. I suppose I should act normal like tonight is just business as usual, but in reality I rarely cook 2 nights in a row. Not that we eat out every other night, but I mean the process of actually planning a meal and following through. We are in a weird place right now. Son3 is in the high school band and gets in much later than The Hub. So much later that by the time he arrives, The Hub has already had something to drink along with cheese and crackers. He still wants supper but generally wants it to be light, but Son3 is starving and wants MEAT and salad and MEAT and rolls and MEAT and green beans and MEAT. I seem to be doing a lot of grilling and salads and rolls and really nothing else. Well, for the past couple of nights we have had a real meal, planned ( Hey! I count it as thought out if you begin thinking before you physically start cooking) and cooked. ( With love? With consideration? With gas?)

For the past couple of days I have indulged my Pinterest interest ( addiction) and followed pin after pin of good things to eat. Now I appreciate cookies and cakes and even cake pops ( though I do beg you people to quit pinning so blooming many of them) but I have been on a vegetable quest. As I mentioned a while back I am trying very hard to eat 5 servings of vegetables each day. I know it is good for me and I actually like most veggies, but I find eating that many means I either have to have salad or crudite' for breakfast. I am getting used to it, but lettuce and morning coffee are not kissing cousins. ( And trust me on this, collard greens are just not a good way to start the day, even if you are like me and love collards) On days like today, I need an additional serving of two at night for the fifth and final serving of the day. I have been eating a boatload of broccoli and cauliflower and asparagus and green beans and just needed something different Enter the new Pinterest rave of the day, Oven "fried" zucchini with a caramelized onion dipping sauce. I started tracing down its' internet origins and though the credit was given to a blog, it seems it originated at a King Arthur Flour site. 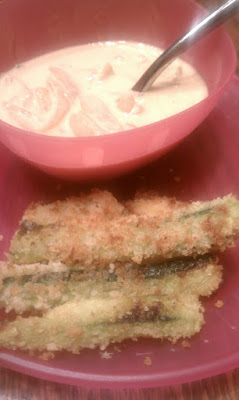 To make the dipping sauce:
Melt the butter in a medium frying pan over moderate heat, and add the sliced onions. Cook, stirring occasionally, until the onions soften, then caramelize. This should take between 10 and 15 minutes. The lower the heat, the longer it takes, but the less likely you are to burn the onions.

Once the onions are a medium brown, remove from the heat and add the vinegar.

Place the onions and vinegar into a small food processor. Add the honey and mustard, and process or blend until smooth.

Add the mayonnaise and salt and pepper to taste, stirring to combine. Refrigerate, covered, until ready to serve.

Set up your zucchini dredging by placing the flour in a shallow bowl, the eggs in another shallow bowl, and the panko, parmesan, and oregano in a third shallow bowl. Dredge sticks in the flour, then egg, then roll in the crumb mixture. Place the sticks on the prepared baking sheet.

Bake sticks for 12 minutes, turn over, and bake for an additional 8 minutes, until golden brown and crisp.

I admit I did not puree' the onions for the dipping sauce. It would have just created one more dish to wash and I am not always about washing unnecessary dishes. It would have changed the consistency of the sauce but not the flavor. I was not fond of the sauce at all. I love caramelized onions and the flavor of them but thought it got lost in the honey/cider vinegar mixture. They overpowered the delicate caramelized onion flavor. I think if I do it again I will use champagne or white wine vinegar, which would be a much more subtle flavor. I would use about less than half of the honey it called for and would use a coarse grained mustard instead of the French's stuff. But I may never make it again for 2 reasons. It just takes too long and too much stirring to caramelize onions that should be blended anyway plus the zucchini sticks were fantastic just plain. I will eat zucchini but it is (was) no where near one of my favorite vegetables. It was outstanding! They are a tad of a pain to make. Well not really a pain but it takes a while to coat them because you have to do them one at a time or you get this big gloopy mess.

I put them together a little differently than the recipe called for. First I peeled mine because I did not look at the recipe when it talked about leaving the skin on until it was a moot point. I put the salted naked sticks in a colander with a breakfast plate on top of them to speed the sweating process a little. When I thought they were sufficiently de- juiced, I put them on a clean tea towel and covered and pressed them with another clean towel. It really did the trick of blotting them on both sides at the same time. I debated about the flour step but decided the King Arthur company had just added it to feature their product, so I put the bare strips in the egg wash and them one at a time rolled them in a shallow bowl filled with the panko, parmesean and the oregano. I strongly recommend the wet hand/ dry hand method of coating them. After using my right hand only for a couple of the strips my had visually looked like a bears paw. I washed the goo off my hand and then used right to dip and left to crumb. I did not have to wash until I was finished. Now for the best part of this whole recipe...Since you spray olive oil on parchment paper lining the pan, there is virtually no clean up and I am all about limiting dirty dishes.

I will put this in the vegetable rotation and can see this becoming at least an every other week menu item!


Now for a really important question. Do any of you happen to know who the patron saint of photographers is? I really do need to petition him/her before Christmas. If I am going to taking pictures of food I at least need a better camera than the one I am using . Of course I can shoot, talk and text all at the same time, so why would I want anything more?
Posted by Anne in the kitchen at 11:18 PM