Eggsactly What We Wanted For Dinner

For the past two weeks I have been slowly feeling my way into the world of cooking for two.  Fortunately The Hub is not picky about what I cook, and if we want delicious food we just go out to eat.  This week we decided to eat in for the entire week.  Oh no!  So far I have opened cans of soup or thrown a chicken breast on the grill  and tossed a quick salad and called it a meal.  Tonight we both wanted something tasty but did not want tons of leftover food.  Here leftovers spend some quality time in a plastic container as they get shoved deeper and deeper into cold air.  They reappear much later in some unrecognizable form to be  tossed down the disposal.  I am seriously trying to limit edible waste so the plan is to cook what we will eat with something left for my lunch the next day.  Well that was supposed to be the plan and I came close to succeeding.

I mentioned in a previous post that we are starting to eat "real food".  We are using food that is as close to its' natural state as possible.  That means no more pre-shredded cheese or mixes or all of the wonderful convenience products that I have used forever.  The internet is a great and valuable tool but it has opened doors to information I had never thought about before.  I am about to rant gently so feel free to skip the next paragraph.

I am not sure who  the brains behind our genetically modified foods are but I wish they had left our food supply alone.  Corn and soybeans are planted and used in almost every packaged product we consume in some form or another.  Both of these are planted commercially with an altered gene which creates a natural pesticide to keep the corn and soy critters at bay.  It seems like a good idea in theory, but every time we ingest those products we get a little of the natural pesticide in every bite.  At least when they sprayed the  pesticides on the food  we had a fighting chance of washing it off.  Now it is part of what we eat on a molecular level.  So we have sworn off all corn and soy products unless they are certified organic.  It's a shame because that also means I have to bid most chocolate goodbye.  Almost all of them contain high fructose corn syrup, all of which is made from GMO corn.  Its tragic for me, the chocolate lover.  I have become a label reader, so farewell Hersheys and most other commercial candies.  Hello imported Belgian chocolates!  There is an upside to everything!  Rant over.

Tonight we were both craving something spicy.  Something spicy didn't narrow our options down very much so I started thumbing through recipes torn from old magazines.  I have no idea how old this is or what the original publication was. 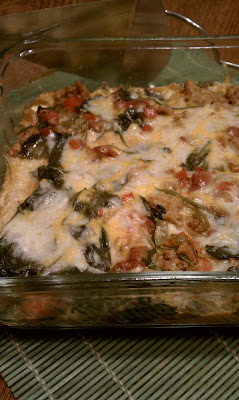 Preheat oven to 350 degrees.  Spray a 9x13 inch baking dish with Pam.  Place the bread cubes in a single layer covering the bottom of the pan.  Whisk the eggs, milk, salt, pepper, and mustard and set aside.
Brown the meats in a large skillet until they are cooked through.  Add the onion and peppers and cook until they are crisp tender.  Stir in the garlic and cook for 1 minute.  Add the spinach and cook quickly until it wilts.  layer half or the meat and veggie mixture over the bread, then pour half of the egg mix over the meats.  Add 1/2 of the cheeses over the egg mixture then repeat with the remainder of the meat/veggie mix, eggs and top with the rest of the cheese.  Cover the pan and bake for 35-40 minutes.

For just the two of us, I cut the recipe in half (mostly) and we had enough for supper tonight and I will  have it for breakfast tomorrow and the next day.  I can't tell you how delicious this was and I am NOT an egg person.   I used the full amounts of the chopped vegetables the recipe called for.  Since it was the evening meal I wanted it vegetable dense.  I also used 2 cups of spinach rather than one for the same reason.  There was more cheese than we like.  We both like the cheese to only compliment the casserole, not overwhelm it, so I used only about 1/2 cup total. I also just used cheddar and threw a few pieces of pickled jalapenos in  skillet when I was cooking the peppers.  It worked just fine. 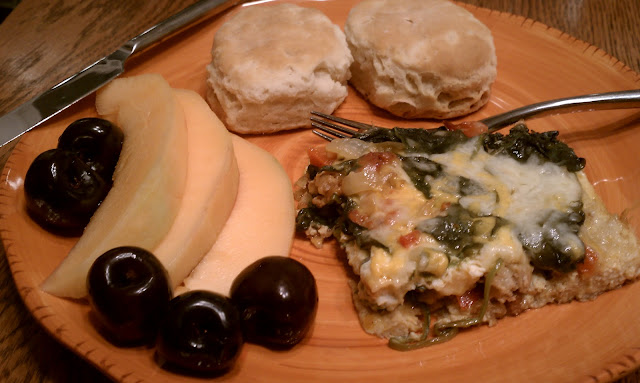 There are a couple of things I will do differently next time and it was so good there will be a lot of next times.  I will separate the eggs and beat the whites until they are really foamy. The yolks and milk and seasonings  will be whisked in a different bowl  and then the foamy whites will be gently folded in.  I think it would have been a little nicer if the egg mix had air in it.  As you can tell by the photo, it was so vegetable dense it flattened the egg mix out a little.  The added air should compensate for the additional vegetable weight.  Still it was fantastic and hopefully no waste!

Besides cooking for two I am having to get used to a quiet house.  When 4 o'clock rolls around something is supposed to happen, and it doesn't.  I am adapting, but I do miss Son3 coming home from school and having a bowl of ice cream while we talked.  Anyone have a cure for 4 pm silence?

p.s. If you notice the two perfect biscuits in the photo you might recognize them as a heated frozen product.  Though I am on the real food track I am also a pragmatist and  we are going to eat what I  already have in the freezer.  Plus who wants to make real biscuits?


pp.ss.  Was just looking at Pinterest.  No wonder this recipe looked good when I saw it.  I pinned  a lightened version of this same recipe just a few days ago!  I wonder how many other old magazines recipes are making the Pinterest rounds right now