You all have heard the old saying "Everything old is new again".  I understand that phrase when it comes to fashion and fads, but you usually don't think about it when you are thinking of food.  It seems there is always another cutting edge, molecular, deconstructed, revisionist food created with the most oddly paired ingredients known to man.  For example, heard about the candied bacon chocolate chip cookies?

Or there are the "experts" who will try and convince you to purchase only vanilla from Madagascar  made from orchids harvested under the third full moon of the year by natives wearing true rubber soled shoes while carrying silk gathering bags.  They will then tell us that there is a static buildup that occurs with anything but natural rubber and that the silk protects the delicate flower buds resulting in much finer vanilla flavoring.

Or you can look in my grandmother's cookbook printed in 1931 that had little room for anything other than plain recipes easily made by almost any home cook.  Amazingly most of them have stood the test of time, plus you can still find all the ingredients because everything was made from scratch then.

I was cookie hungry the other day, but had very few ingredients on hand because I had not been to the store in a couple of weeks.  I grabbed Grandmother's book since I knew it required only staples and started searching for something that might be tasty, yet easy. ( Oh and it could not require any butter since I had none and only 1 egg 'cause that was all I had)  So using those parameters I started looking.  It did not take long to find a recipe that met all my needs. 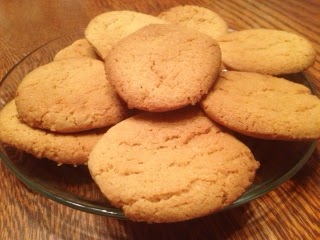 Mix shortening and brown sugar in a medium bowl.  Stir to blend well.  Add the vanilla and egg and mix until creamy.  Mix all the dry ingredients together then add to the sugar mixture.  Stir until well mixed.  On a sheet of waxed paper roll the dough into a log.  Wrap it with the waxed paper** and put it in the refrigerator ** until it is firm.  Slice in 1/8th inch slices ( I could not get mine sliced that thin so mine were a tad less than 1/4 inch)  Place about 2 inches apart on a greased cookie sheet.  Bake for about 8 minutes, but I suggest watching them closely after 6 minutes.

These came out perfectly delicious.  They were crisp and  sweet with an intense brown sugar taste. The recipe made about 40 medium sized cookies ( 2 inches in diameter) and there were equally tasty warm from the oven or cooled.

I tried a second batch to see if the dough behaved well after freezing.  After rolling it I cut the roll in half, wrapped them in freezer paper and stuck them in to freeze.  I baked one half a couple of days later and the other half a week later.  I could tell no difference in the taste or texture so I would guess you can freeze the dough for about 3 months. ( Seems to be standard raw cookie dough freezing length)
You do need to let the frozen dough sit out for about 10 minutes before slicing the cookie rounds.

And what is new again about this old recipe?  This is my new go-to in a hurry cookie.  It really was that good.

* I confess, I do not use Crisco shortening. Ever.  I found a product at my local health food store called Spectrum shortening.  It is an organic non-hydrogenated product.  I use it mainly for pie crusts, but it worked really well in these cookies.

**
These are places I updated the recipe.  It called for a medium oven and after several tests I found 375 was the best temp.  It also suggested rolling the dough in a floured tea towel and storing it in the icebox.
I actually used parchment paper, but more people have waxed paper than parchment so I suggested that instead.  But if you had rather, feel free to use that floured tea towel!