Well, Son3 leaves in the morning for school.  Fortunately his flight is not until 10 so we will not have to wake at the crack of dawn to get him to the airport.  He is so excited to get back to school and we are glad to see him go.  At the same time we will miss him far more than he misses us.  My ace in the hole is his food.  He is going to either be using his own money to eat out or eating in the cafeteria on our dime.  If he does like he did in the past he will eat in the cafeteria until he just can't stand it anymore and then he will venture out. The prices in the Upper West Side tend to be mainly out of his price range, so eating out means grabbing something cheap from a cart.  When he gets really hungry he can think of eating at home and even if he doesn't miss me he can at least miss my cooking.


This was second on his list of  the "last week requests" and his choice for the final last week meal. Imagine thin chicken cutlets covered in a lemon burre blanc.  That is pretty close description of this.  It is a fairly quick cooking meal, but has more steps than I like for a typical meal, plus this has a boatload of butter in it. It needs to be one of those once a year dishes at the most.  (I don't think I have made this in the last two years and it will probably be that long before I make it again) 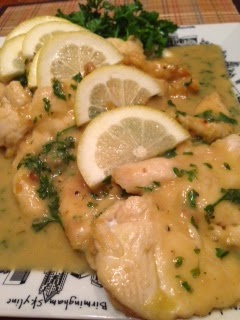 Between 2 sheets of parchment paper or plastic wrap pound the chicken breasts until they are very thin. (I have a stainless steel 1 cup measure that is heavy and flat.  It makes an excellent pounder).  In a wide flat bowl mix the flour, salt and pepper.  Flour each chicken cutlet.  Set aside.  Heat the oil in a heavy skillet  and place the cutlets in one at a time.  I can only do 2 at a time in my largest skillet.  When they turn very pale brown flip them and cook through. ( This will only take three or four minutes if they are as thin as mine were) .  Remove the cooked chicken to a paper towel lined plate and finish cooking the remaining pieces.  Pour off any remaining oil in the skillet.  Saute the shallots in 1 tablespoon of butter until they are wilted and soft but not brown.  Pour in the wine and the chicken stock and cook it down until there is about 3 tablespoons of liquid remaining.  Turn the heat off and let the pan cool for about 1 minute.  Then add the butter 1 tablespoon at a time, fully incorporating each tablespoon before adding another. Continue until all 8 tablespoons have been added.  Turn the heat to low and stir in the lemon juice and parsley.  ( Sauce should be thick and velvety)  Add the chicken to the sauce to coat.  Remove each chicken piece to a serving plate.  Give the sauce one more thorough stir and spoon it over the cutlets.  Garnish with thin sliced lemon halves and a sprig of parsley.

Well what can I say?  It's a rich delicious meal.  The chicken is so thin that is just about melts in our mouth.  Of course it might be that buttery sauce that makes it feel so melty.  It is just a mouth full of deliciousness. Ordinarily I serve it either over spaghetti noodles or a mound of couscous. Tonight I served it plain with dinner rolls and green beans and it was more than enough.  I had a little flour and 2 small chicken breasts after fixing the six the recipe calls for so I went ahead and cooked them.  Good thing I did because Son3 ate 4 cutlets.  That ought to hold him for a while!.  Maybe even until Christmas!

Wishing all the guys and gals returning to school the best of luck and happiness and wishing all the parents a lighter laundry load !