"When a true genius appears, you can know

him by this sign: that all the dunces are in a

confederacy against him."   Jonathan Swift


Whenever anyone asks me what my all time favorite book is, I don't have to stop and think.  It's not one of the classics, nor is it a dramatic piece. Hands down my favorite book is "A Confederacy of Dunces" by John Kennedy Toole.  I have read it about 15 times and still pick it up and read bits from it regularly.

A smeared carbon copy of his manuscript was found in his home, shortly after his untimely death.  Thanks to his mother, who bugged Walker Percy to death, the book was published by LSU Press in 1980 and became a cult hit.  Slowly its popularity gained momentum and it was  awarded the Pulitzer Prize for Fiction in 1981. 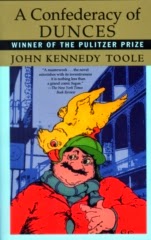 Where to begin?  COD is set in New Orleans in the early 60's. Ignatius J. Riley is out and about in his home town.  Ig (just because it is easier to type) is one of those people who have very firm and fast codes regarding how everything should work, how every person should think, basically how the entire world should run.  Unfortunately for him, the world runs rather contrarily to his particular and peculiar ethos.

The entire book takes place in a very short time span, sending us on a romp through Uptown New Orleans and The French Quarters.  Ignatius, 30 and unemployed, is living with his Mama while trying to avoid the real necessity of producing income.  After listening to the urgings of a couple of friends, his mother insists he find employment.  The resulting job searches and jobs introduce us to a wonderful cast of characters and situations. At the same time we are privy to Ig's ongoing written communications with a former college classmate, New York beatnik Myrna Minkoff (The Minx). Through all of this we get to see his world through his eyes.  I think the only words to describe it would be a tragic comedy.

There is no way I could possibly do justice to any of the actual writing so I will not even begin to try.  If I taught high school English this would be on my required reading list.  It has the best character development I have ever read.  ( If I were a high school English teacher I would probably be fired for having my students read this book.)

Toole weaves a fantastic yarn. The chapters are usually divided into parts.  One is the narrative, the other is Ignatius' mail with Myrna and the third is excerpts from Boethius' "Consolation of Philosophy", and Ig's penned responses to it.   Toole  also works magic writing in the various voices  and accents that are indigenous to the South and New Orleans.  If you are familiar with the city, then you understand what I mean, and if not just read it, enjoy it, and learn.

If you love to read and love to laugh this is the book for you.  I read it in 1981 for the first time and fell in love/dislike with every single character.  Now,  all these years later I still find them as alluring, appealing,  and unbelievable as I did the first time I met them on the page.  I cannot recommend it strongly enough.

If you do read this or have read it before please tell me what you did or did not like about it.  If you read it because of this review and didn't like it I will sit down while wearing my Ignatius hat and send you a apology letter written on a page from a Big Chief tablet!  I promise!

p.s. I love this book so much, I own 3 copies.  2 are loaners and I will lend them to anyone who wants to read it, but the 3rd is never loaned to anyone.  Grove Atlantic Press started publishing it through permission of LSU Press.  Originally I only had copies by Grove, but thanks to Little Professor Bookstore and about a 3 year wait, I have an LSU Press copy.  Book nerd nirvana!
Posted by Anne in the kitchen at 10:16 AM