The day before yesterday I had pulled some pork chops out of the freezer to thaw for last night's dinner. Because I am not as good labeling my freezer packages, I thawed breakfast pork chops rather than regular chops.  Oops! Of course I had no idea until I was ready to cook. They are much, much thinner than a standard pork chop and require much less cooking time.  Also, because they are so thin, it meant we were not going to have a lot of protein with our meal and I would have to pad it with something other than a salad.  So, my plans for grilling them went flying out the window and, typical for me, I had to punt. Thank goodness I had loaded up on produce this week!

I think I have said before, I like having dense vegetable dishes, for a couple of reasons. First is the clean up issue. I had much rather clean one pan than several, that is just a no brainer. Secondly, if the vegetables and protein cook in the same pan, the vegetables pick up some of the delicious meat/fowl juices and the flavor of both components is magnified. (My exception to the one dish meal is fish, and I love fish cooked without additional ingredients altering its texture and flavor) 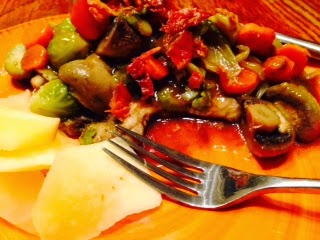 In a large pan with a lid, heat the oil than quickly brown the chops. Remove and set aside.  Saute the onions until they are slightly caramelized, then add the brussels sprouts. Lower the heat and cook with the lid on until the sprouts are slightly wilted.  Sprinkle with a little salt and place the browned pork chops on top of the sprouts and onions. Place the carrots celery and mushrooms on top of the chops, and pour the broth over all.  Sprinkle with the thyme, put the lid back on and cook until the chops are done and the carrots are tender.  With a slotted spoon remove the chops and vegetables to a bowl.Put the chops to one side and stir the veggies together into one happy medley.  (Taste for saltiness and add more if needed.)  Sprinkle with fresh ground black pepper.

In a small bowl stir the arrowroot and water/broth until smooth.  If you do not have about a cup of liquid in the pan, add water or additional broth to equal a cup. (Doesn't have to be exact so just eyeball it.) Stir in the balsamic vinegar and the arrowroot mixture.  Cook until it is thickened.  Put a chop on each plate, top with vegetables, spoon the sauce over all and add a slice of crumbled bacon as both garnish and deliciousness.

This was absolutely fantastic.  All the flavors melded and though each retained its own personality each was enhanced by the others. I am especially glad I decided to finish cooking the chops on top of the brussels sprouts and onions. The pork flavor totally infused each of them and only amplified their natural goodness.

I thought I had enough vegetables, so rather than serve a side salad, I lightly steamed crisp apple slices and served that as a side. (Use crisp somewhat tart apples for this). This reminds me of a fall/winter dish and since our temperatures have begun to climb rapidly, I will say goodbye to this dish until next fall. But you can rest assured that this will often be in our food rotation then.

What do you do when your menu plan changes abruptly?

*If you are not doing paleo, I would strongly recommend using cornstarch as a thickener. The arrowroot is a little more viscous than I like, but it's a legal paleo thickener, so I use it (just not very often).

Posted by Anne in the kitchen at 7:33 PM