Desserts! What a joy, what a treat, what a dilemma.  I have a love/hate relationship with them. I absolutely love sweets in just about any shape and form except anything with cooked fruit or licorice. Other that that they are fair game, but I seem to have no will power over them.  And yes, I know about moderation and enjoying all things in moderation, but I don't seem to have the necessary brakes to enjoy a small slice of cake when the whole blooming thing is left staring at me.

I have solved this by limiting my sugar consumption to one week every two months. And guess what week this is!?!?! Not only is it dessert week, but TheHub is out for dinner meetings every night but Friday, so I can make whatever I want. (Though he is coming home and having dessert with me he has no say in whatever it is.  After all he is eating white tablecloth meals while I am having a hunk of cheese and whatever cold leftover veggies are in the fridge) I can tell the week is almost over, because I have overdone chocolate and actually wanted something lighter tonight. (Hmmm, I guess I could forgo dessert entirely right? Nah! It's in the rules and I do play by the rules, sometimes.) 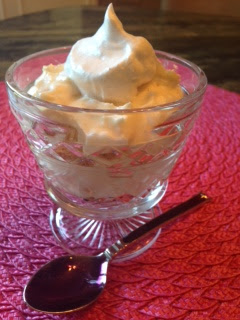 No-Bake Pineapple Cheesecake in a Jar
(Totally wrong name, it should be pineapple
mousse based on it's taste and texture)

Pour the pudding mix in a bowl add the pineapple, juice and all and the additional pineapple juice.  Mix with a wire whisk until it is nice and thick and, well, pudding. Fold in the 1/2 tub of cool whip. Now here is the tricky part, not. Place the graham pieces in the bottom of a small mason jar (if you are so inclined) or a bowl or parfait dish. I don't care and I am pretty sure the pudding doesn't either.  Glob 1/8 of the mixture on top of the grahams in each bowl or jar. Sprinkle more graham bits and glob on the remaining pudding between the 4 servings.  Top with a dollop of whipped stuff and eat.

This tastes absolutely nothing like cheesecake, but I didn't really expect it to because it is made with instant pudding mix. I do not buy mixes as a rule and I sure as heck don't buy instant pudding mix except for nanaimo bars which I make every Christmas. Somehow I bought the cheesecake by mistake and have been wondering what to do with it ever since. I randomly followed a link back in the no sweet months, saw a recipe that called for cheesecake pudding mix and mentally filed it. While I was looking through the pantry today I saw the pudding mix, remembered it, and now it is dessert.  I am not sure if the original instructions had pineapple juice or not, but I had some so I added it because it seemed too thick without it. I also had no graham crackers, but did have a box of graham crumbs (also for the nanaimo bars) in the freezer. I just sprinkled them in the bottom of the parfait glass put some pudding mixture the sprinkled a few more before adding the second glob.

It is a tasty, light dessert with a defined pineapple flavor. The graham crackers/crumbs lend a tad of crunch to what would otherwise be just an airy fruity mousse.  If you have some cheesecake pudding mix hanging in your pantry this is a pretty tasty way to get rid of it, just don't expect anything near cheesecake flavor or consistency.

I will try to make this again using cream cheese and superfine sugar, with real whipped cream.  I think it would taste much better, but honestly it was not bad at all.  In fact, as much as I hate to admit it, it was kind of good. And yes I licked the bowl, that's how I know what it tasted like.  The actual parfaits are still in the fridge. (And yes, I left a rather hefty taste, well over a tablespoonful but only because I believe in truth in reporting! Yeah, that's it!)
Posted by Anne in the kitchen at 6:50 PM