Once a week we opt for a meatless meal. It is not some weird political statement or an obsession with the latest health food fads. It's just something we do ( actually more often during the summer when fresh peas, okra, tomatoes and corn are in abundance). I guess I am the most meat indifferent of the 3 of us, but it is simply not something we require every meal. Since it was really cold tonight and the Hub had to work late, I decided a soup meal would work best. I wanted something with a little bit of substance to it without being too fatty or creamy. I would like to say I searched through each cookbook I own to find just the perfect soup, but honestly I found one that sounded great on the first try. I pulled out my copy of The Grit Restaurant Vegetarian Cookbook. The Grit is a restaurant in Athens, Georgia that caters to the herbivore crowd. Its a sans meat joint but not all the items on the menu are vegan. There are butters, eggs, cheeses and creams in many of their recipes so its quite possible for the carnivores to have a filling meal there also. In fact if you didn't know in advance everything was meatless you would be fooled by a couple of their stews and sandwiches.
Tonight the choice was made with a couple of things in mind. I pretty much had everything on hand and it just sounded good. I choose the Corn and Potato Chowder. It seemed like it would be substantial enough for a stand alone soup. My guess proved to be correct. The soup was dense and creamy (ish) without being fatty. The flavor of the corn was the high note, but the soup itself had a slightly herby taste. The potatoes ( I cooked them a little too much and they were a little soft) were a little bit too salty. That is one thing I will alter when I make this again, and I will definitely make it again. For the record everyone had only soup and it left us full and mouth satisfied.
The Grit Restaurant Vegetarian Cookbook Jessica Greene and Ted Hafer
Corn and Potato Chowder (vegan)
2 medium Yukon Gold Potatoes, peeled and cut into 1/2 inch cubes
3 1/2 cups water
1/3 cup soy sauce
1 teaspoon onion powder
2 tablespoons vegan margarine
1 small yellow onion diced
1 small carrot cut in matchstick pieces
2 ribs celery chopped
1/2 cup flour
1 teaspoon salt
1/2 teaspoon freshly cracked black pepper
1/2 teaspoon dried parsley (1 1/2 teaspoon fresh)
1 pinch dried thyme
1 pinch dried oregano
2 cups soy milk
1 1/2 cups corn kernels (fresh or frozen)
Boil the potatoes in the water, soy sauce and the onion powder until barely tender. Remove form heat and set aside.
Melt the margarine in a soup pot and add the onion, carrot and celery. Saute over medium heat until the vegetables are tender. ( about 5 minutes) Add the flour, salt, pepper and herbs. Cook over a mid low heat stirring often for about 10 minutes. Increase heat and gradually stir in the potato mixture, then the soy milk and finally the corn. Simmer for about 15 minutes, stirring often. Serve immediately in warmed bowls. (?? Do any of you ever warm the bowls??) 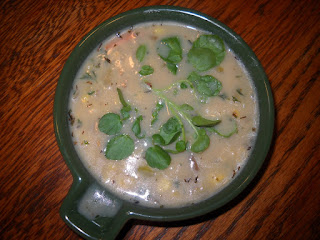 This is the recipe as it is given in the book. I must confess I did not follow it exactly and there are a couple of things I will change the nest time I make it. First instead of soy sauce I will use a low salt tamari. I like the flavor of tamari a little better than traditional soy sauce. I thought the soy made the potatoes a little too salty. Since the tamari is darker than traditional soy sauce I will drain the potatoes after cooking and will add vegetable broth to equal the drained liquid. I personally thought the soy threw the color of the soup off a little.
We are not vegan and don't pretend to be, so I used a canola oil/butter blend for the vegan margarine. Other than having dairy in it it would not have altered the taste at all (except butter tastes way better than margarine) I followed the recipe step for step until I got to the soy milk addition. Once again we are not vegan, so used skimmed milk instead. I did not heat the bowls as instructed. There was very hot soup going into said bowls and if the family wanted it to be hot while they ate they had to adjust their eating speed to accommodate the room temperature dishes. It's not like I served it up and left is sitting on the table for a while before I called the troops to chow down anyway. I used frozen corn because it is not fresh corn season. I put 2 types of corn in it. I had some White Silver Queen frozen kernels but wanted the brighter yellow in it also so I used regular yellow corn kernels.. I split it half and half just for the color. After I ladled the soup in the bowl, I put several sprigs of watercress on the top of it just for a little visual appeal. The Hub and I both ate it, but Son3 does not like strange green stuff on his food, so he balked. The final verdict came when everyone went back for seconds!
We all agreed it was good and all agreed it would be something we would like to have again. This made a boatload of soup, so I am guessing I am going to be eating this for lunch for the next several days. ( Looking at it I would guess there are about 6-7 servings in the recipe) I am going to try freezing a couple of servings, but I am not sure it will hold well. Will see and let you know if it is a success or failure. Won't know till I try.
Yay 4 recipes down and only 96 to go!
Happy Eatin'
Posted by Anne in the kitchen at 2:41 PM