Happy Mardi Gras and all that Jazz! 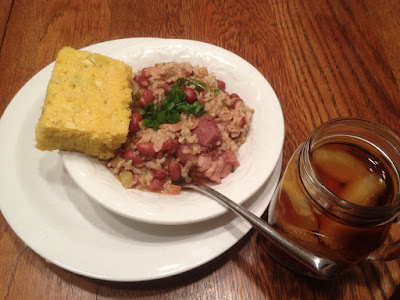 Yesterday I didn't have to go to the hospital at all, so I filled the day doing laundry and running errands. Until you are in one of those situations you forget how precious time to do the little things actually is. I am one of those people who does not look at preparing supper as a chore. ( Well, except for the pesky clean up part which I am none too fond of) I actually enjoy the process of chopping, mixing, stewing, stirring, whatever the process is. To me it is some kind of therapy. I can start fixing meals and go into a Zen like meditative state where the world moves beyond me and I am one with my knife and onion. Truth be told, when I am at my most vulnerable emotionally, I bake. So, if you ever stop by and there are 3 kinds of freshly baked cookies and a pie sitting around you can rest assured it has been a stressful day. I was not stressed at all yesterday but did get to enjoy the planning and prepping of our meal.

Unlike a lot of people we did not get to a city that is steeped in Mardi Gras tradition, but what good is having a day like that without celebrating somehow. I was leaning toward etouffee' or jambayla, but I would have to make 2 different versions since Son3 is allergic to shrimp and I did not want to do that ( use more than one pot). With those traditional meals out of the picture it left just one other dish, red beans and rice. I have made it tons before, but I found and tried a different take on it. I have always used sausage and what I consider very normal cajun spices when I make it. This recipe was a little different, plus it used up about 1/2 pound of roasted pork I had left over in the fridge.

Put the oil in the bottom of a nice heavy dutch oven and bring to a medium high heat. Toss in the onion, celery and the bell pepper and stir while wilting. These should not brown but just be wilted very well. If you want the garlic add it now and let it just wilt also. I opt to skip the garlic in beans and rice. Personally I see no point in using the ham hocks then overshadowing the delicious flavor of the smoke with the garlic, but that is a personal choice of mine. Immediately stir in the cooking liquid then add the cleaned beans. Cover and let them come to a boil, then reduce the heat to a strong simmer. Add the bay leaves, thyme and parsley, stir and then add the ham hocks and chopped pork. Cover and bring it back to a rolling boil, then reduce heat a little below medium. ( I have a gas stove so this is easy to do. If you have an electric stove I would reduce it to medium for about 20 minutes and they reduce it further to low for the remaining time) and let it just cook away until the beans are soft and the flavors have all combined. ( Do not cook the beans uncovered. They will never become wonderfully soft and creamy otherwise.)

The recipe called for smushing some of the beans with the back of a spoon to thicken the cooking liquid. Instead, about 20 minutes before serving, I kicked the heat back up and brought it to a rolling boil. We only eat brown rice and I always have Minute Brown Rice on hand. I added enough to equal 6 servings, put the lid back on the pot and turned the heat off. If you cook the rice with the beans the rice also absorbs the flavors and makes everything twice as good. I let it sit for 7 minutes and then our supper was ready to eat. These were the best beans and rice I have ever made or eaten. The entire family loved them!


Meanwhile back at the ranch..I had decided to make cornbread to go along with the RB&R but surfing the net found a recipe for Louis Armstrong's supposed cornbread recipe. I have no way of knowing whether it was his or not, but thought we would try it anyway.


I made this almost by the recipe. A can of corn has slightly more than a cup so I used all of it. Other than that I did not change a thing. This is going to be our go to cornbread from now on. It was even better today !

We threw in a little jazz and had our own Fat Tuesday, Birmingham style!

So after a day of laundry, errand, and cooking therapy I am off to the hospital.

Laissez les bons temps rouler!
Posted by Anne in the kitchen at 12:55 PM