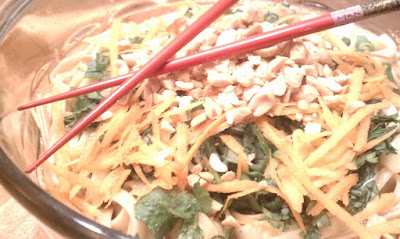 As I mentioned in some prior posts, Dad has been in the hospital for quite a while now. He is improving daily, but still has a long road in front of him. While I do not begrudge the time I am spending with him, I still have a home and family who also require a little piece of me and it is getting harder and harder to stretch the time between the two worlds. Thank you Pinterest for this wonderful quick meal I pinned a while back that came to the rescue a few nights ago. ( Honestly, I can't remember which night)

This is a vegetarian dish, but some chicken, shrimp or sliced pork could easily be added for any of you serious carnivores who don't feel they have truly eaten unless there is a protein in the dish. It is not vegan, but could be altered for anyone who balks at using animal product in their food. ( Not judging, but vegan chocolate is bad and would kill the entire vegan concept for me.)

Cook the noodles until done and drain in a colander until dry. ( To me this means dump the noodle in the colander and jiggle them until most of the water is gone. Then put the noodles in a large bowl with enough room to thoroughly mix everything.

Combine the soy sauce and honey in a small bowl and stir well. Add it to the oils and mix together.

Pour over the hot pasta and stir thoroughly to mix. ( Here the recipe calls to put everything in a covered bowl and chill for 1 day. "I say Nay Nay!"*

Immediately sprinkle the onions, cilantro, carrots and peanuts over the hot pasta mix. Put it on the table along with 4 plates and let everyone see how lovely it is before mixing and serving. It was delicious hot, tasting very much like pad thai.

I followed this to the letter except for that silly chilling part and all that honey. Next time I make it, I will use about 1/3 cup of sesame oil and 1/4 cup vegetable oil. ( Thought it was a tad too oily) I used a 6/3 ration of soy sauce to honey because I thought it would be too sweet with the one to one measure called for in the recipe. It was perfect for us, but you might want to try it sweeter for you. ( If you are vegan using agave syrup instead of honey would work) If you use less honey the mixture becomes a tad thin. Next time I make this ( and I will make this soon) I probably will add a little peanut butter to the liquids ( 2 teaspoons maybe ) just to thicken it up a bit . Since the peanuts are on top of it anyway the added peanut flavor should not be an issue at all.

Prep the veggies early in the day and the meal will come together in just the time it takes to boil and drain the noodles. Super good super quick meal. We added a side salad with some asian dressing ( bottled) and called it a meal.

* " I say Nay Nay" tagline from my favorite comedian John Pinette
Posted by Anne in the kitchen at 11:48 AM