A couple of  days ago I was in the back yard doing a few chores when I noticed the herb pots were going crazy.  I guess the temperatures have been mild and we have had enough rain to keep them alive.  I had been ignoring them just assuming they were finished for the year but they were flourishing.  I managed to harvest quite a bit of basil, mint and the most beautiful tarragon of the season.  After washing, I chopped the mint and basil and froze it in ice cube trays for use later, but the lovely tarragon scent begged to be part of that night's supper. Tarragon reminds me of the flavors of France so my first stop was a French cookbook.  The recipes sounded fabulous but required a lot more time than I was willing to invest in a Monday night dinner. What to do, what to do?  It had to be a quick fix, but I wanted it to be extremely tasty.  A couple of google searches later found 2 recipes that could be combined and tweaked into something  possibly delicious.

In a saute' pan, melt butter and add the olive oil.  Add the chicken breasts and slowly brown, turning once, adding the shallot when the breasts are turned. Salt and pepper as desired  Turn the heat to medium low and cook until the shallots are wilted.  Pour in the wine and cover the pan cooking on low heat until the chicken is just cooked. ( About 10 - 15 minutes depending on the breast thickness) 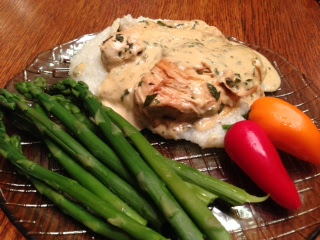 Mix the cream and dijon mustard and pour it over the chicken.  Stir it picking up any brown bits in the bottom of the pan and incorporating it into the cream mixture.  Sprinkle the breasts with tarragon, cover and let it cook on low for about 2 minutes.


I suppose you could serve it over rice, pasta, couscous, or mashed potatoes, but we live in the south and I happened to have grits handy so that is what I used.   Since we had some asparagus in the fridge along with a bag of small sweet peppers, the sides pretty much picked themselves.

This was a tasty meal.  I thought the consistency of the grits was a perfect bed for the cream sauce, and the wonderful light licorice flavor of the tarragon was a nice pairing with the sharp dijon flavor.  It would work with or without the wine.  I didn't notice any particular flavor it added, but it did give some needed moisture.  The same amount of chicken broth would probably work just as well.  I used whipping cream, only because it was available, but next time I will use a lighter cream.  It should work just as well and would lighten the recipe a bit.

This will become part of our meal rotation.  It really is tasty enough for guests, so if you are a tarragon fan and want to come over give me a call.  Just make sure you catch me before the frost hits and kills the gorgeous plants.
Posted by Anne in the kitchen at 1:01 PM