I have been so busy pinning things on Pinterest that I have not had time to do anything.  That is an outright lie.  We all know we have the same 24 hours in our day, so I guess I have been pinning and doing other things instead of making plaster hands, or vertical gardening, or refashioning tee shirts, or even cooking. To be totally honest I have been mostly out of town lately, coming home to wash clothes, re-pack and leave again.  But I am going to be here a while now so there is no reason for me to sit and pin when I can be doing what I pinned.

Tonight I attempted a recipe I ran across a little bit ago and every time I see it I want to make it.  Tonight was that night.  I ran across the pin from a website called Culinary Concoctions by Peabody http://www.culinaryconcoctionsbypeabody.com/  It is a fun food blog to visit and I really do envy the name.  I wish I had been so clever! Perhaps I can have a renaming ceremony or at least  create a sub-name.
Oh short attention span get back on track! Do not be fooled.  Even though the name of this is bread it is really a loaf cake.  The original recipe is for 2 loaves.  I did not want 2 loaves of deliciousness screaming at me so this has been reduced for just one loaf. 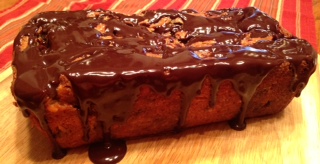 (Notice why the cake should be totally cool prior to glazing!)

Preheat oven to 350 degrees. Mix 1st 6 ingredients with an electric mixer for 2 minutes and set aside.  In a separate bowl sift the flour, baking powder, baking soda and salt.  Measure the buttermilk.  Mix the flour and buttermilk into the wet ingredients alternating, flour mix, buttermilk, flour mix, buttermilk.  Stir until just well moistened ( like muffins) and add the coconut, chocolate chips and the almonds, stirring enough to distribute them well. Spread mixture into a greased and floured loaf pan (or 4 mini loafs) and bake for 1 hour. ( Important! Use a metal pan instead of a corning or pyrex one. I didn't do that)

Remove from the oven and let rest for about 10 minutes ( Important! I failed to do this) Remove from the loaf pan and put on a rack to cool. (Important!  I didn't do this either)  When cool place on a serving plate and poke holes halfway through the cake all across the top of the cake. ( Important! Do not poke the holes to the bottom of the cake!  I did that)

Drizzle chocolate ganache ( recipe follows)  over the top of the COOLED cake ( Guess by now you know I didn't do that either!)  Slice and enjoy!

Place ingredients in a small saucepan and bring to a boil.  Allow it to boil for 1 minute then turn the heat off but leave the pot on the burner.

Bring the cream to a boil ( nuke it for about 1 minute and 15 seconds)
Pour over the chocolate chips and stir till well blended and smooth.

This was delicious but as you can tell I did several things wrong.  In addition to the mistakes I mentioned above, I was reducing the recipe mentally as I went along.  Since I have the attention span of a gnat, by the time I added the coconut, chocolate chips and the almonds I forgot I was halving everything, so I had way too much for the cake to handle.  The result was a dense heavy loaf rather than a lighter one.  Did it taste bad?  No it was delicious but it was very rich.  Very, very rich!   Another slight problem I had was the coconut syrup.  Again I forgot I was cutting the recipe in half until I had it mixed and already cooking.  No problem right!  Just pour half of the syrup on the cake and no harm, no foul.  Except I had poured all but bout 2 tablespoons on it before I remembered I was supposed to use just half.  So now I had an over dense  super saturated cake. Also I believe I mentioned the need to cool the cake before removing it from the pan and pouring the syrup over it.  I took it out of the oven and immediately poked the holes to the bottom of the pan and poured the syrup over it.  About that moment, I realized when it soaked in I was going to be in trouble getting it out of the pan so I took the blazing hot syrup soaked cake and inverted it onto a plate, then had to flip it over again onto a flat surface ( cutting board).  By the time I did all of that I had cake in about 4 pieces.  For the sake of photographing a loaf shape, it had to be held together with dry spaghetti noodles.  Pay attention to the cooling and syrup application instructions!

You will notice the different coconut syrup recipes.  I do not like the way coconut extract tastes and since I have coconut water in the fridge all the time and have coconut oil in the pantry i decided to use them instead.  The taste was really good, closer to a fresh coconut taste without the bitter aftertaste in coconut extract.

Will I make this again?  Yes but I will pay attention to all of the things I did incorrectly.  Oh my that is such a long list of corrections to pay attention to.  Maybe if I don't see anything sparkly to divert my attention I will be OK.  Or maybe not.  I probably would not place a bet on it! 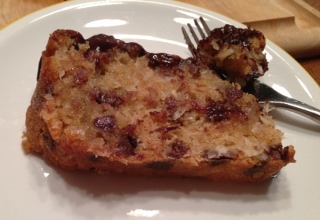