Too Cold for Traditional Spring Meals

Last night was another dip in the temperature of what has been a freakishly cool spring.  Traditionally by now the pool should be just about warm enough for swimming and the days should be good for sunning and a little gardening.  Instead, it might be sunny and gorgeous then dip down into the 40's.  I live in Alabama and it is supposed to be full fledged nearly summer right now!

The Hub had planned on hitting a few golf balls at the driving range and then we were going out to eat.  Instead it was drizzling rain and cold, plus the range was closed so dinner plans changed on a dime.  My go to quick meal is to toss something on the grill and have a salad but the rain and cold even canceled that plan.  A quick trip to the freezer found a pound package of Conecuh Hickory Smoked Sausage just waiting patiently.  It only takes it about 1 hour to thaw so that determined what the meal would be.

Normally we cook it on the grill and serve it with a sauce made of melted raspberry jam and jalapeno jelly. Oh my goodness, I can't tell you how outstanding it is!  ( Thank you Elaine for first serving it to us that way.  We have had it many times since!)  Because grilling was out,  I kind of punted and came up with a variation of a dish we often have. 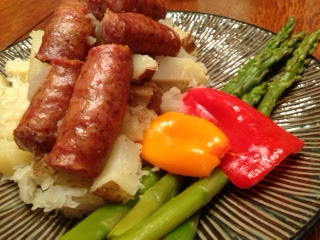 1 pound Conecuh Hickory Sausage ( any smoked sausage will do but it will not be as good as Conecuh)
3 medium sized potatoes, well scrubbed and diced
1 medium yellow onion, diced
1/8 teaspoon crushed caraway seed
1/8 teaspoon crushed fennel seed
salt and pepper to taste
15 asparagus spears
small red and orange peppers, sliced in half and seeded
1 jar kraut ( the jarred stuff doesn't develop  a metallic flavor but if that doesn't bother you, use canned)

In a large skillet heat the sausage until it sizzles, remove from the pan and cut it into 2 inch pieces.  Before returning the sausage to the pan add the potatoes and onions and cook them for just a minute so they can pick up a little of the flavor from the drippings of the sausage.  Add the sausage on top of the potatoes and onions and pour 1/2 cup of water over everything.  Sprinkle with salt pepper and the crushed seeds.   Put a light fitting lid on the pan and let it cook over a medium low heat until the potatoes are about half done. ( Check a couple of times and add additional water if the bottom of the pan dries out)  Place the asparagus spears and pepper halves on the sausage, replace the lid and let it cook until the asparagus is steamed and the potatoes are soft  ( about 5 minutes).  While the veggies are steaming heat the kraut in a small pan until it is hot.  To serve, plate the asparagus and peppers to one side.  Using a slotted spoon to drain the kraut, place about 1/2 cup on the bottom of each plate.  Spoon potatoes and onions over it and serve the sausage on top of those.  Eat and enjoy!  It makes a fast, easy meal.

There was about a cup and a half of leftovers that I plan on turning into a weekend breakfast hash by warming it up and topping it with either a poached or fried egg.  Well, I will put the egg on The Hub's.  Personally the only way I can choke down a few bites of egg is if they are well scrambled and I have serious doubts about adding scrambled eggs to hash.

If you live in Birmingham, The Pig in Bluff Park has Conecuh Sausage.  I know they sell it other places and in other towns and states, I just don't personally know where . They also have mail order capabilities from their website.
http://www.conecuhsausage.com/default.aspx

Now I need it to warm up and be sunny for a while.  I really would like to cook summer foods  again!

Posted by Anne in the kitchen at 1:01 PM