When I made the strawberry brownies I decided to try a variation using pineapple and brown sugar.  Last night I walked through the kitchen and caught a whiff of a seriously ripe pineapple.  I figured that was a Divine message to experiment

Before I go any further with the brownie story please allow me to give huge props to The Hub and Son3.  Last year nearly every Wednesday they took The Father Parent to play the par 3 golf course at the club.  He was recovering from Guilliane Barre and had limited use of his feet and arms. Their attentions, encouragement and inclusion helped him tremendously. This summer sees him in another health battle.  So, the first week Son3 returned home from college they began again.  I love them for many things but I do especially love that they can see beyond themselves!

Each week after golf, The Mother Parent drives to our house and they eat with us.  It includes her in the plans and I am not sure which one of them enjoys it more.  We always have a very simple supper but I do include a dessert.  Since they are pretty willing guinea pigs and since The Father Parent has a tremendous sweet tooth, it was the perfect time to try something new. 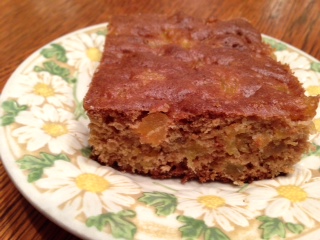 Preheat oven to 350 degrees
in a small saucepan cook the pineapple and sugars with the butter until it melts and the pineapple begins to loosen up a bit. This takes about 6 minutes on a medium heat.  Add the pecans and vanilla and let it cook another couple of minutes.  Set aside off the heat until it is lukewarm.
Sift together the dry ingredients and set aside.  Butter a 9x13 pan and set aside.
When the pineapple mixture is luke warm beat the eggs one at a time into it. ( Make sure it has cooled to lukewarm or you will have scrambled eggs in the pineapple mixture and no one wants that)
Pour the wet ingredients into the dry and stir with a spoon until all the flour mix is incorporated.  Do not over beat.  Pour it into the prepared pan and bake for about 25 minutes.  If you err in the baking time undercook rather than overcook ( which I did).
This was good and I thought it was better than the strawberry brownie.  The brown sugar gave it a tiny bit more "chew" which was better than the over cakey strawberry brownies.  That being said this still is nothing like a traditional brownie in consistency.I served this both plain or with a scoop of ice cream.  It seems that some wanted it "topped"and some wanted it unadorned.

The over-all verdict was well received except for The Hub who declared it slightly overcooked___several times!  I can't thank him enough for pointing it out to me multi times.

I am not sure if I will ever try this again or not but if I do I will be extremely careful of the cook time, I will add pecans  and may or may not let The Hub have any!
Posted by Anne in the kitchen at 9:45 PM