Congee...Rx For What Ails You

Yesterday three of the four in the family all came down with the most horrid bout of food poisoning any of us had ever experienced. For the record, I have never spent 29 straight hours in the bed before.  (We have it narrowed down to one of two restaurants.  Needless to say we will no longer be eating Half Moon Cookies or  baked ziti.) Today we were in the healing phase, which is good but it also meant stepping back into the world of eating, which we were a little wary of doing.

I did a little research about foods that are the best when leaving a delicate situation and found Congee mentioned just about everywhere I looked.  I have never had congee before, but I figured if it is a staple breakfast in Asian homes it might be worth a try.  I thought I would give it a try and see if it really was the magic bullet we were looking for.  Congee in its purest form is nothing more than mushy rice.  It consists of 1 cup of rice, 9 cups of liquid, salt to taste and a boatload of cooking time. ( In fact if you eat at a treacherous restaurant I suggest you go ahead and start this in a crock pot as soon as symptoms set in.) 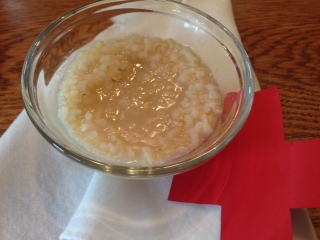 Put one cup of rice ( I used short grain brown rice), 4 cups of water, and 5 cups of chicken broth in a large pot.  Bring to a boil stirring occasionally.  When it comes to a boil turn the heat down to low, loosely cover the pot, and cook for about 2-3 hours, stirring occasionally. ( I cooked it for 2 because we were getting kind of hungry.)  It becomes more  like a porridge than rice.

It was perfect for us.  It was filling and tasty in a kind of bland food tasty way.  This will become my go-to "sick" food.  Since we were only able to eat a couple of tablespoons each there was a good bit left .

I decided to refrigerate the leftovers.  After reading about it and all the variations it has one day this week, when I am feeling much better, I plan to eat it in a more traditional manner.  All the recipes I read had different variations of ingredients to top the congee, but shredded pork and scallions seemed to be mentioned  most often.  Salted plums are also recommended but I have no clue what they are or where to get them.  If anyone knows please leave me a comment in the comment box.

Meanwhile I am going to lay low until this is completely over.  This might be the death of our insane eating out pattern.  I am not sure we could survive another round of this!
Posted by Anne in the kitchen at 9:05 PM