I have been home alone this weekend and it was a great time to get a few things done that I would not normally do when others are around.  I was able to take things apart and leave them that way until I finished what I was doing, rather than take apart, put up, take back apart, and put up over and over.  It has been nice.

It was also a good time to try a couple of unusual recipes I wanted to try, without regard to anyone else's food preferences.  Plus Shelby, the dog is here if I need an additional taste tester.  She seems willing to try just about anything.

I have been toying with a project aimed at people with severely limited food budgets focusing on ultra cheap easy to prepare recipes. I had seen a couple of Youtube videos about creating a breakfast sausage from oatmeal.  I started looking around the web for other ways to create a "meat" from grains and happened on this one for "Chicken Fried Steak" at The Prudent Homemaker.   I decided today might be a really good day to try it.  The nicest thing about just me being the only one for lunch was that I could fix this with no expectations whatsoever.  If it tasted bad, well, that was fine and if it was good it was simply a bonus. 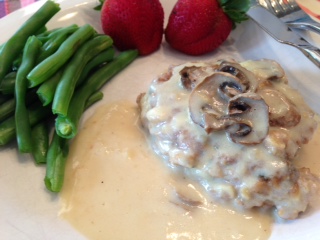 Heat oil in a large skillet with a lid.

Mix first six ingredients.  If it is not wet enough to stick together, add a bit more water
Scoop with an ice cream scoop and put into the hot oil.  Press the tops lightly with a spatula to create a patty shape.  Brown then carefully flip to brown the other side
Whisk the soup and milk together in a bowl.  Turn the heat down to a low simmer and pour the soup/milk mixture over all.  Flip the patties again so both sides are covered with the soup mix.  Cover the pan with the lid and let simmer for about 10-15 minutes.  Check 3 or 4 times while cooking to make sure the mixture does not stick.

I made this and expected the worst.  I figured I would have a mushy oatmeal patty with soupy sauce on it.  I was completely unprepared and blown away by this.  The first bite not only tasted like chicken, it felt like I was eating chicken.  It had virtually the same mouthfeel as some of those chopped and pressed chicken patties that come in the freezer case, yet it had a much nicer taste.  I ate it on a plate with green beans and a couple of giant strawberries, but this would have been just as good on a bun with the "gravy "over it.

Since I was the only one here, I halved the recipe.  Using a standard ice cream scoop I wound up with 3 large patties and 1 small patty.  There was an ample amount of sauce for all 4 pieces.  Using a scoop I think you would get 7 full patties out of the whole batch.

I found it was best to mix the ingredients except for the egg and stir it for a few minutes to let the oats and the dehydrated onion absorb a lot of the water. I continued stirring for about 5 minuted before I added the egg.  The mix was very wet and I don't think I could have ever molded it into patties, but like I said earlier, just use the scoop.  It worked perfectly!

Since I was trying to reduce the cost of making this as much as possible I reconstituted instant milk powder for the milk and I used Soup or Sauce  Mix* instead of the soup.  I found it on the Utah State University Cooperative website, and have used it for a couple of different things before.  It worked well  with this also.  In addition to cooking the S.O.S.  I added about 1/4 cup of sliced mushrooms to it prior to blending it with the milk.  I had some in the refrigerator so why not?

For the record, after  while I ate my lunch, I may have slipped a couple of nibbles to Shelby.  She loved it too.  But just to be fair and accurate, I got a third volunteer taster.  Mom came up to swim and before she got in the water I told her what I had made and asked forced her to try a bite. ( Mom loathes oatmeal.)  She could not believe what she was eating either and thought it was tasty but was mostly surprised at how meatish  ( invented word but it works here) it was.  Woo Hoo!

This is something I will tinker with and see what other incarnations I can find for this.  I will definitely be trying the oatmeal sausage.  If it tastes anything like this it might become my vegetarian option for breakfast.

Mix well with a whisk and store in an airtight glass jar.
Use 1/3 cup of the mix with 1 1/4 cups water.  Cook in a small pan over medium heat stirring with a whisk until the mix thickens.  Once thickened use in place of 1 can of cream of whatever soup.