I used to eat Morningstar Farms Sausage every morning that I ate breakfast, which was not often because I don't like food in the morning.  I thought I was doing something a little healthier for me, until I started reading about all the genetically modified foods and realized the soybeans were one of the most modified veggies out there.  Seems I had been ingesting almost straight GMO soybeans.  I figured it was time to change but really had no idea what I was going too change to!  I suppose I could eat real sausage, but I don't like all the grease or the way the kitchen smells after cooking it.

I recently saw a Youtube video about making breakfast "sausage" using oatmeal rather than pork.  This is an old World War 2 recipe that became popular in a time of rationing.  I am assuming people wanted a traditional breakfast food but did not have access to it like they had before the war.

This is a 3 step process but the results were pretty spectacular considering it is a "meat" composed entirely of oatmeal,  eggs as a binder and spices. The first time you make it, it seems complicated, but it really isn't.  It is just different from cooking traditional sausage. 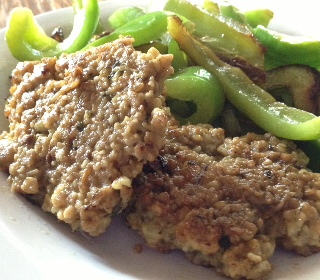 2-3 cups water flavored with 2 chicken or vegetable bouillon cubes ( low salt is best)
Bring the 2-3 cups of water and bouillon to a slow boil in a sauce pan.  Mix all of the ingredients except the flavored water in a bowl.  Stir to combine well.  Pat into patties ( this makes 4 very large or 8 medium size patties)  Put about 1 Tablespoon of oil in the bottom of a skillet and brown both sides of each pattie.   Remove from the pan and put into the boiling water. (This step is vital to cook the oatmeal) Turn down the heat and simmer them for about 20 minutes.  Remove them from the pot and drain well.  Once they are drained you have 2 options.  If you are going to eat them immediately brown them again in the same pan you originally used until they are slightly brown ( takes just a couple of minutes).  If you want to eat them later just put them in the fridge in a ziplock bag and brown and heat as desired.

This had a mouth "feel" similar to meat and the sausage flavor is wonderful. It is a little lighter colored than pork sausage, but comes close to looking like the turkey variety. I toyed with the recipe and altered the spices a bit to try and capture the flavor of commercially prepared sausage.  The taste is pretty darn close !  These even passed the teenage boy test. Son3 ate a couple and declared they were not exactly like sausage but were really good and something he will eat again and again.  This high praise was from the pickiest eater in the family.  I thought they were very tasty, and they paired well with some sauteed green peppers.  I am sure they would have been delicious with some apple slices or apple sauce or eggs ( if you eat them _yuck!).

After the initial test run of one batch I made 4 batches and cooked them in the same bouillon water adding just a bit more water as it evaporated.  After they were drained I put them in pint size freezer bags, 4 per bag.  I stuck them in the freezer and now when I decide I want "sausage" I take them out the night before and let them thaw in the fridge.  The next morning all I have to do is brown them!  It works very well.

Though I have not tried it yet I intend to crumble a couple up prior to browning and make a cream gravy to serve over a biscuit.  Will let you know how that goes.

Meanwhile if you are craving a healthier sausage you might want to give this a try.  I know I am glad I did!

* I am not vegan so I have not tried to veganize these but the eggs act as a binder, so a flax seed replacement might work to make this an option.

Posted by Anne in the kitchen at 9:26 AM