Last week I tried making French bread.  We all thought it was delicious and thought I would be baking it weekly, but a funny thing called life happened and I have not always been hanging right around the kitchen to punch down rising dough or start early enough in the day to have it ready for dinner. Yesterday was one of those days.  We were going to have spaghetti and what would have been better than French bread with garlic butter?  The only problem was, I didn't think of making it until noon and just did not have time for 3 bread risings. Punt!


I found this recipe for quick yeast rolls I had cut from a magazine many years ago.  I have no idea what magazine and am very sorry I can't give them credit for it. They actually called them Quick Yeast Rolls, but I thought they were quicker than just quick, hence... 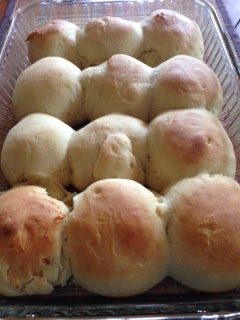 The recipe had basic bread making directions for mixing by hand  ( mix the first 4 ingredients in a bowl and let rest for 15 minutes.  Add the flour, salt and egg and mix well, turn on a floured board and knead) but I am going to write how I actually made it, because I don't think I should do anything by hand if my Kitchen Aid will do it for me.

Using the paddle, mix at a low speed the water, yeast, melted butter and sugar.  When thoroughly combined turn the mixer off and let the yeast start to grow for about 15 minutes.  Add the flour salt and egg and mix to just combine with the paddle.  When it begins to hold together change to the dough hook and let it knead the dough at a low speed for about 3 minutes.  Let the dough rest for about 5 minutes then form it into 12 balls.  Put them in a greased 9x13 pan. ( My advice is to use a metal pan.  I used a clear pyrex dish and the bottoms were too brown).  Cover with a towel and place in a  warm place for 30 minutes.  Preheat the oven to 400 degrees.  Bake the rolls for 10 minutes and enjoy.

This is not as light as a traditional dinner roll, but it is much lighter than a biscuit. The rolls were slightly sweet and very yeasty tasting.  I had one for breakfast and they were just as good a day later. Easy Peasy and delicious.  I am going to experiment using various herbs and spices and cheeses to see what other flavors will work with this dough.

* I used sunflower oil in mine.  Since I am not going to the grocery store until May, I wanted to use something other than butter for baking.  It worked perfectly fine.
Posted by Anne in the kitchen at 10:04 AM