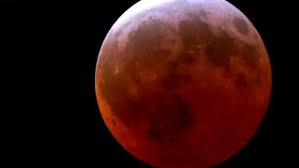 TheHub and I had planned to head to the lake place for the night. The possibility of seeing the red moon with little ambient light competing with the show just sounded delicious. Plus the lake is only 45 minutes from our front door so it would be little more effort than running across town.

TheHub was driving down in his car so he could leave straight from the cabin to go to work.  He would only have to leave about 30 minutes earlier than normal to be at his office on time.  After that scrumptious breakfast I fix for him each and every morning, he would be properly fueled for a productive work day. (I can hear him laughing as I type those words. I mean come on! Is it any easier for me to pour that cereal and milk in a bowl than it is for him? )

I was supposed to drive down with Shelby, the dog and thought we could have a little girl time, coffee on the deck and mosey home about noon.  She thought it was a great idea also, but I think she secretly also planned on an early morning dip in the lake.

I just love to have a plan in place and all the details worked out, until I woke to rain! And clouds! And a forecast predicting clouds and light rain all day and night.  So there was no need to have the sleepover at the lake, because ambient light did not matter if we would only be seeing a cloud cover.

Instead the red moon came and went, unseen by me while we sat on the deck at our house watching clouds. Bummer! Thankfully, we had a little wine to go along with my whine, and wouldn't you know it, right at eclipse time a tiny hole appeared in the clouds and, at least I got to see that.

And you know the saying, "Want to make God laugh, make a plan!"

Instead I am leaving a link for some lunar listening pleasure, oh, and don't think this will keep me from making some plan that probably won't happen for tomorrow either.  I have enough hair brained capacity for unlimited futile ideas!

https://www.youtube.com/watch?v=Vo3JznMhpWc
Posted by Anne in the kitchen at 8:49 PM