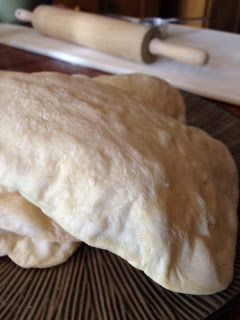 This is the slightly oblong pita bread fresh from the oven prior to cooling and deflating.


Some of you might bake bread all the time and think nothing of pounding out round after round of pita.  Not me! I have never tried baking it before in my life because, well, because I can find it in every single grocery store I frequent sitting happily on the shelf waiting for me to buy it. That is, until I started this 50 buck a week food challenge and found there is no room for pita in the budget. (Especially since TheHub bought a 10 dollar slab of cooked ribs for Labor Day!)

I had made hummus and dip for Saturday's ballgames but had nothing but cucumbers and carrots for dipping.  I found a recipe online for pita and thought, why not? Oh yeah I had run out of flour, so I had to add 5 pounds to my budget.  I guess I could have found pita for the same price but I still would have been out of flour and would have to buy more anyway so I bit the bullet, bought the blooming four and baked away.

The bread recipe itself is insanely simple:

Pour the warm water (about 105 degrees) into a small bowl and sprinkle the yeast on top of it. You are not supposed to stir it, but I can never keep from giving it a quick swirl with a fork.  Let it sit until it is all dissolved and bubbles just a tad at the water's surface (5ish minutes). Meanwhile mix 2 1/2 cups flour with the salt and stir to mix well. Add  the yeast to the flour and stir well until you the flour is all incorporated and you have a very soft dough.  Turn the dough out onto a floured work surface and begin the kneading process, using the heel of your hand to stretch the dough, folding it in half then stretching it again with the heel.  Add flour as needed to the work surface to keep the dough from sticking. (Use no more than the additional 1/2 cup) and repeat the kneading process until you have a very smooth dough that easily holds its shape.
Oil the surface of a large bowl and put the dough into it and rub it over the inside of the bowl to coat the entire surface of the bread dough.  Cover and let rise in a warm place until the dough is double in bulk (1 1/2-2 hours).

Preheat the oven to 450 degree with a baking sheet or stone in the oven to get up to temperature.
Very gently deflate the dough on a floured work surface.  Divide the dough into 8 equal pieces and roll into balls.  Using a rolling pin, roll as many balls into 8 inch circles as your pan or stone will hold.  I had only 1 small baking sheet I was willing to sacrifice if the heat warped it (it didn't) so I could only bake 2 at a time. Keep the rolling surface lightly floured so the pitas will not stick.  Pick up and turn the pitas as needed to keep them round (I didn't, hence wonky pitas).  Slap those rounds onto the hot baking sheet, quickly close the oven door and let them bake about 3-3 1/2 minutes.  Have the next ones ready to bake as soon as you open the oven door to get your cooked pitas out. I never took the try out of the oven.  I used tong to grab the cooked pitas and slapped the uncooked ones on the baking sheet as fluidly as I could.   Cover the cooked pitas with a clean cloth until they are al finished baking. I thought I lost too much heat, so after the second round I left the pan in the hot oven for about 5 minutes to build up the oven heat again. Continue cooking the rest of the bread.  After mine cooled and deflated I stuck them in a plastic zip bag and we ate them with the dip and hummus the next day.  I am not sure how long they would keep but I am guessing 2 days at the most without being frozen.

When I make these again I will pay a bit more attention to keeping them round.  We were going to be tearing them into pieces for dipping so it was not crucial but if I were baking them for pocket sandwiches a lot more care would have been needed to make sure they were round. And yes I will make these again, even when I am no longer watching every single penny.  It was so easy to do, and next time I will not be using limited kitchen equipment and can use my mixer dough hook for kneading and a real rolling pin instead of a floured drinking glass. (I forgot and used the rolling pin for the first 2, then remembered I was supposed to use simple equipment and changed over to the drinking glass.  The rolling pin is so much easier!)
Posted by Anne in the kitchen at 6:44 AM