Pasties, It's Not What You're Thinking 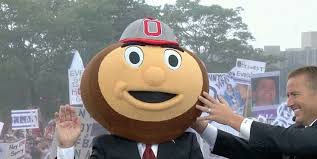 Before I get into the main point of this post please allow me to share with you what our Saturday's during the college football season are like. We wake and turn on ESPN's GameDay. Generally I take a look to see where they are, I look at the crowd to try and find the Washington State University flag. (So impressed with those guys who must have a boatload of time and money on hand to go to every single GameDay broadcast with their WSU flag.) Then I go about my business and come back just before 11 to see which mascot head/hat/headdress Lee Corso dons as his Gameday final prediction. This week he chose Brutus Buckeye. Bzzzzzz! Wrong pick Lee! Oklahoma State lead by Baker Mayfield won the game. (How sad is it that I am an old Alabama gal yet I know Baker Mayfield is the Oklahoma State quarterback. Does this give it away that I am the sole female in household of guys?)

Anyway, TheHub went to the Alabama game with Son2 and wanted something "totable" for dinner when they returned. Saturdays during football season are the only nights in the year that we might possibly eat in the den instead of at the table, and that is only if the night games are particularly good.
This week's were Clemson/Auburn, Notre Dame/Georgia. South Carolina/ Missouri and USC/Stanford. We watched Clemson/Auburn mainly but flipped back and forth among the others to keep up with them. After the Auburn game was over we watched the last quarter and a half of Georgia /Notre Dame, so it was worth making an easy, neat dinner that was self contained, relatively decent for us and survived sudden outbursts and yells!

Lest you think with the headline post "pasties' that I have taken a new job working the pole at Sammy's Go Go lounge, rest assured this is referencing a dinner recipe, not "clothing" of an exotic nature.

Pasties, it's what's for dinner! 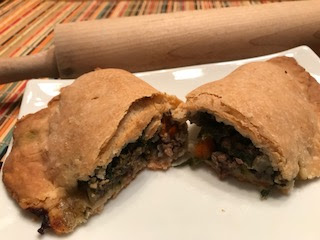 Brown the ground beef, toss in the carrots and onions and cook until both are tender, adding the wine as needed for liquid. (If it gets too dry add more wine or water, but wine is better) Throw in the mushrooms and let them soften, then add the spinach and let it wilt. Give every thing a good stir, add the seasonings and cook for a couple of minutes until the mixture is almost dry. Stir in the heavy cream and continue cooking until it is reduced by half, then remove from the heat and let it cool for about 5 minutes.

While the mixture is cooling, roll the crust into 4 thin circles about the size of a breakfast plate. (If I had used  pre-made crusts I would not have rerolled it, I would have just taken it from the tin, put it on a pastry cloth and made a giant pastie (because I am an efficient time manager lazy) but I actually made my crust* so I did the 4 balls rolled into circles thing.

Put about 1/2-3/4  cup of the mixture into the center of the pie crust dough in a nice compact mound fold the top over the bottom and seal together using the tines of a fork to press the dough together. Trim off any excess. (which I did not do because I didn't care what it looked like since it was just the two of us so I just pressed it together with my fingers and it was not pretty. Carefully place them on an ungreased cookie sheet.

Bake at 375 for about 15 -20 minutes until the crust is nicely browned. Take it out of the oven and let it rest for at least 5 minutes. If you try to take them off the pan too soon you will have nothing but a broken crust and a big mess. Remove with a wide spatula and serve. Ummmmmm!

*Since the aim of my cooking this month is to use us some of my food storage items, I used about a cup and a half of Bisquick then added enough flour and shortening and water to make 2 crusts. Because the Bisquick has leavening in it, I did get a weird rise, but like I said it was just the two of us and it didn't matter.  The taste was the same and now an additional box is gone from the pantry. Double win!