This week I tried a recipe from an old cookbook, The More with Less Cookbook, stuck in the middle of the cookbook shelf, surrounded by cookbooks I actually use on occasion.  I am sure I have looked at it at some time in the past few years but I don't remember when. I remember buying it when the older sons were very young and we were very, very broke. The book focused on consuming the easiest renewable resources for the majority of the meals, so the main ingredients in most of the recipes were either eggs or plant based items.

I have no clue what prompted me to look at it tonight other than the fact that I had about 6 pounds of ground chuck in the refrigerator that needed to be used or processed tonight, and I remembered that I could get the beginnings of several more meals prepped if I used the cookbook as a guide. (OK, just browned beef with onions and garlic in zippies for the freezer.) All I was really looking for was an approximate portion for a few recipes, knowing I could write the recipe name on the outside of the freezer bag, eliminating a little work and also guess work when I decided to actually cook.

I started looking through the book and instead of thumbing through the recipes, I found myself reading the commentary and also the little asides written throughout the book. About 2 hours later, I realized it was nearly 8 o'clock and I had done nothing toward getting our dinner made, much less coming up with some rudimentary meal plan. I had to change tacks and get something cooked. The possible recipes and freezer cooking could wait until after supper.

Step one was to find a quick recipe that would be stove top to table in less than 25 minutes and it had to be something I had every single item at the ready. After looking at about 5 recipes I hit pay dirt with kima. According to the recipe kima is a Pakistani entree, which is really just a stew with Southern Asian flavors. It sounded quick, easy and best of all, was made in one pan. 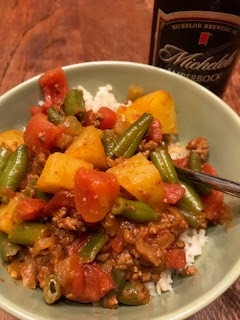 In a large pan, wilt the onions in the butter. Add the garlic and stir a few seconds, the add the ground chuck and cook until it is browned, stirring often. Though it did not call for draining the fat off the cooked beef I have to, so I did. Stir in the spices and cook a little more than add the potatoes followed by the undrained tomatoes. Cook until the potatoes are about half done. If you need more liquid add about a half cup more before adding the frozen beans or peas. Cook until the beans/peas are done and serve on rice. (So thankful I always have a box of brown rice minute rice in the pantry)

This was quite tasty, and unbelievably easy. TheHub and I both ate it with enough left over for both of us to eat another night this week. Next time I  make this again, and will probably add another potato, more green beans and leave off the beef for a vegetarian meal. With a green salad to go along with it and the meal would be perfect. Of course I will make it another time with beef in it also.

Posted by Anne in the kitchen at 9:37 PM