My freezer has been pretty good to the grocery budget lately. I'm currently on a mission to use many foods I had frozen during the spring. I don't want to have to pitch foods just because they find their way into the nether regions of the freezer and wind up with freezer burn. Some of the things I knew were in there but I am also finding odd bits and pieces that need to be used. This has required some creative solutions since I am on a mission to find ways to use them.

For example, I found 1/2 cup globs of frozen canned pumpkinI stuck in the freezer after using just 1/2 cup when I first opened the can On of our local grocers makes their own sausage and every few days they have the unsold sausage marked down to half price. Whenever I see it I purchase it, bring it home, brown it and immediately freeze the browned sausage. I always have a few bags but the type varies. It might be andouille, Italian, Polish or just a basic sage sausage. (Note to self: start labeling the bags with the type of sausage instead of just the generic term "sausage" )

This pumpkin sausage soup was the result of one of those missions. I found the basics on a keto blog and used it as a starting point for soup. The following is what I actually did. 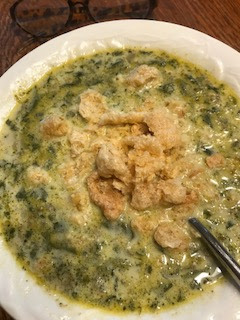 Shhhh! Don't tell this soup it's not pretty. It gets so many kudos for taste it forgot to care about it's appearance.

1 lb sausage (I used Italian hot sausage, because that was what was browned and frozen)
1/2 small red onion, minced (If you are not doing keto use the whole onion. I was just saving carbs)
1 pepper, diced. (I used 1/2 yellow and 1/2 green red bell peppers because I had both partially used peppers in the fridge)
1 clove garlic, minced (again of you are not doing keto try 2 cloves)
1 pinch salt
1 tsp  sage
½ tsp thyme
½ tsp red chili peppers flakes (optional, but because I used the hot sausage I did not add them, but have added it since when making it with a plain breakfast sausage. I like heat but if you don't, then omit it.)
½ cup pumpkin puree
3 cups chicken broth
1 bag frozen spinach
½ cup heavy whipping cream (If not doing keto use half and half to reduce the fat)
2 tbsp salted butter

The soup prep is pretty basic. Brown the sausage in a pan. (Mine was browned then frozen, so I added about 1 teaspoon of oil along with the sausage to wilt the onions and peppers, since I had drained the sausage prior to freezing it.) After the sausage loses it's pink tint  toss in the onion and pepper until it wilts but does not brown. As soon as they have wilted, turn the heat down and add the garlic, sage and thyme.  Give it a quick stir, letting it cook a little under a minute. You don't want  the garlic to brown or burn. Quickly add the pumpkin and the chicken broth and stir well to combine everything. Toss in the frozen spinach. Let it cook at a slow boil for about 5 minutes then lower the heat. Add the heavy cream and butter and bring the temp to serving temp without letting the cream boil (It will break and be grainy). Everyone else here topped theirs with corn chip crumbles, but I used crumbles pork rinds, as seen in the picture. Not as good as the chips would be but keto compliant and crunchy.

This is some seriously delicious soup. Everyone here really did like it and I have made it twice since the first time I tried it. I think this may become our go-to winter soup. Like most soups it is even better the second day. I am going to start making it the day before I intend to serve it, just for the flavor boost.

Posted by Anne in the kitchen at 9:54 PM