I have decided to do this a little different this year.  I have mentioned before that we eat out____a lot!  Too much in fact, but that is neither here nor there, it's just what happens.  Often we have had something so delicious that we both want it again.  Unfortunately for us a lot of  those delicious flavors happen in other cities so we aren't able to make reservations and go again the following week, or maybe even ever again.  Lucky for us I can usually pick out the flavors and if I remember to make a note of  right after we eat, I can SOMETIMES replicate the dish.

This year Monday's are going to be RESTAURANT REDOUX, my attempt at recreating something we found to be fabulous and want again.  We have just returned from a quick trip to New York. We wanted to eat lunch somewhere un-rushed with enough space for conversation.  We have found that space is quite a commodity in the city so we opted for lunch at Arte' Cafe on W.73rd.  The food there is above average and the tables have room around them so you are not to close to the person sitting at the table next to you.  ( A few restaurants leave you no option but to become new best friends with the other diners because you are all but sitting in your neighbors lap)

Arte' offers a prix fixe menu for lunch which turned out to be another bonus.  If not I probably would have ordered a salad and certainly not the one I chose for my part of the meal.  Along with my Caprese paninni  I had the pear salad ( Italian name I don't remember at all) which amounted to a large bed of baby arugula with these cool spirals of green pear, candied warm pecans, goat cheese and a very mild vinaigrette.  Tonight I decided to try and duplicate this salad.  It was not exact but was close and I think I learned what to do next time I make it. 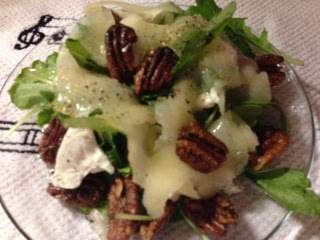 Place the greens in a small colander. Gently rinse them with cool water.  Tap the sides of the colander to help remove the excess water, then put the damp greens on a clean kitchen towel and very lightly blot to remove the moisture. ( Arugula does not cotton to a ride in the salad spinner)   Put on salad plates and put a few (6-8) candied pecan halves among the greens. Slice the goat cheese in half  ( making 2 circles of cheese) and cut it into 4 wedges for each salad. ( I did not do this and had cheese blobs instead.  Still delicious but not very pretty)  If you have mad knife skills or one of those old Popiel  spiral apple slicers then cut the paper thin pear spirals.  I have neither so I just used my vegetable peeler to create paper them.  They were straight rather than spiraled but my mouth did not care at all. My pear was a tiny bit to ripe.  A greener pear would have been just perfect but mine was ok and the slices were so thin.  Funny what a difference a day makes in pear world.  Drizzle dressing on top of the salad and enjoy!

* Pecans--Mix the oil, sugar, and spices in a small bowl.  Stir in the pecans and toss to cover them.  Bake in a 350 degree oven for about 10 minutes.  Trust your nose on the time.  You want to smell roasted but not burnt.

**Dressing-- Mix 3 tablespoons non flavored oil ( like grapeseed)  with a 3 teaspoons of fresh lemon or lime juice.  Add salt and pepper to taste.  Add about 3/4 teaspoon of sugar ( I used a full teaspoon and it was a bit too sweet)  Mix well and drizzle over the two salads.

I would say this was pretty much a success.  The pecans at the restaurant might have been a little sweeter and that could be changed by adding another teaspoon of brown sugar.  I actually preferred the less sweet version.  A firmer pear would have been better.  The one I had was really green when I bought it yesterday, but had ripened just enough that it the slices drooped a wee bit.  It was no where near ripe, but not as crisp as it would have been Sunday.

I will put this in the food rotation when orchard fruits are at their prime.

Now I just have to remember something we have eaten out recently that I want to try to redoux.  Should not be hard since I am eating out tomorrow night!
Posted by Anne in the kitchen at 7:45 PM