Tonight The Hub is in Chicago and that means 2 things, the remote is mine and popcorn for supper!  Even better someplace near his hotel is noted for their pizza and they prepare "ready to travel" pizzas, so he is bringing one home for supper tomorrow.  The only down side to this is the fact that I was going to try and replicate something we had eaten at a restaurant every Monday night, so I cheated and made it for supper last night.

10 or so years ago we took a spring break trip to Whistler in British Columbia for some skiing and then flew down to Phoenix for a little spring baseball.  We are smart like that and like to travel with clothing for 2 climate extremes in the same suitcase.  As fate would have it there was a little stroke of serendipity
the day we arrived in Arizona.  Alabama's basketball team was in the March quarter finals  and would be playing there.  A couple of phone calls and a quick change of clothing ( from sweaters to something appropriate for 90 degrees) and we had scored tickets to the game and were headed downtown.  Now remember we were in the process of traveling and I don't think we had eaten anything but plane peanuts by this time.  We had to meet someone well before the game to pick up the tickets and were going to have a couple of hours to kill prior to going into the arena.  We decided we would just find something close by and whatever they had we would eat.

The only restaurant we found open was a pretty decent size Mexican restaurant which was fine with me. My Beloved Sister and I had  already completed a cheesecake and hotdog tour of Birmingham and I had just begun a Chile Relleno tour.  ( For those of you who have never done a tour, it requires eating from places all over town to determine the "best")  Bingo!  A new touring venue!

I have no idea what the name of the restaurant was nor what The Hub and Son3 ate.  When I ordered  the waitress said they were a little different from traditional rellenos.  The dish arrived at the table like a huge cloud in a  casserole dish  It could only be described as a cheese stuffed chile souffle.  I have tried the dish at every Mexican restaurant we have been to since  nothing has come close to the puffy deliciousness I ate that day.

My experiment was a slight deviation from a traditional cheese souffle recipe I have used for years.  Also since there were only 2 of us I cut the recipe in half.  If you choose to double it add 1 additional egg white to the recipe.


So this is my take on the dish and it was very close.  In fact since 10 years has passed I can't say whether this was better or worse,  just that it was very, very tasty 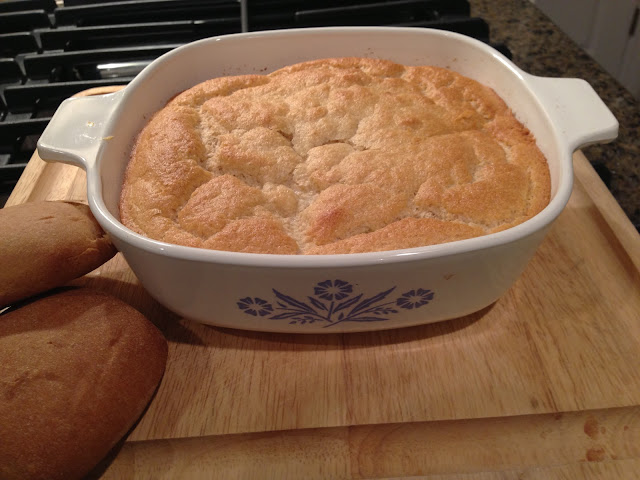 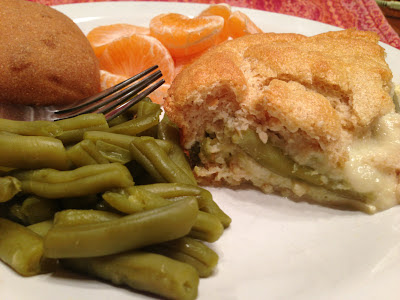 Drain the chiles, cut small slices of cheese  and stuff inside each pepper.  Each can has 6 peppers so you will need a total of 6 slices.  I cut mine slightly less than 1/4 inch thick.  Arrange them in the bottom of a greased casserole dish.  They will overlap if you use a small dish like I did.

In a large glass bowl beat egg whites until very stiff and set aside.

Whisk the egg yolks and add the milk to them.  Slowly whisk in the flour, salt and chili powder.  Stir on the melted butter and mix well.  Slowly fold into the stiff egg whites, making sure to fold rather than stir keeping as much air in the mixture as possible.  Pour over the chiles and bake for about 30 minutes at 350 degrees.

Remove from the oven and cut almost immediately.  Serve piping hot with salsa*

This was really good and will be a part of our regular food rotation.  It was good, quick and a different type meal than we usually have.  It would have been perfect with a big salad, but we had none.  I guess that is what a grocery moratorium does for the salad stock.

This was so easy that I would do it again next week, except I have to remember something new and memorable I have eaten out.  Good thing it is just Monday and I still have 4 or 5 restaurant possibilities this week.

If you are in Phoenix and near the Diamondback Stadium or the Arena just walk around and look for the little Mexican joint with the freaky rellenos.  You will be glad you did!

p.s.  This would be really good for a brunch with some chorizo on the side.