We have decided we will no longer eat out on week nights.  It sounded good in theory until I realized it meant cooking every night, which I really don't mind doing.  It 's planning the grocery list, buying the groceries, bringing them in from the car and putting them away that bugs me.  And if that is not enough it means remembering to have something in mind, and thawed before thinking about cooking.

Or it means we have something like we did last night, a punt meal where I scramble through the freezer looking for whatever will thaw easily and will "go" with whatever produce I have on hand.

Toward the back of the freezer I found a bag with about 1 cup of browned ground beef.  I grabbed it and tossed it still frozen in a pan over low heat.  After about 5 minutes of stirring it broke apart into manageable frozen bits.  I quickly added 1 whole onion sliced in thin strips, 2 cloves minced garlic, 1 small yellow pepper, ribbed and seeded  and sliced into thin strips.  I knew I had the beginnings of something, but I had no idea what.

Son2 and Son3 have accused me of being a food hoarder.  They claim I have back-ups to the back-ups.  I call it a very well stocked pantry and, after last night, so should they. A couple of looks through the shelves and I had something that could pass as a decent weeknight meal. 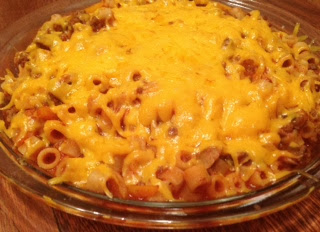 ( And yes I am aware of what a bad picture this is.  It was ready to eat and my cell phone was handy.)

1 lb-ish ground beef ( I used much less and it worked fine)
2 cloves minced garlic
1 onion cut in thin slices
1 small bell pepper seeded, ribbed and sliced thinly
1 large grated zucchini
1 jar/can pizza sauce ( use pepperoni pizza sauce)
pizza sauce can or jar filled with water
ditalini pasta ( about 3/4 cup)
1 cup sliced mushrooms
any other traditional pizza topping you have available that you like
1 cup grated cheese (mozzarella would have been better, but I only had cheddar)
1/4 -1/2 cup parmesan cheese ( Only you know how cheesy you like things)

In a pan brown the ground beef, add the, onion and cook until wilted, toss the garlic in the pan and cook until it is softened but not browned.  Add the peppers and cook just a minute. When no one is watching add the grated zucchini.  They will have no idea it is in there, but it adds to the vegetables in the meal.  Pour the pizza sauce over all and stir to combine.  Pour the water in and go ahead and fill the container with water again just in case you need it.  Add the pasta and stir to mix everything.  Cover with a lid and turn the heat down to  med/ med low.  Let it cook until the pasta starts to soften.  Lift the lid and check to see if additional water is needed. ( Is sticking to the pan?  Mine was.)  If so, add it and stir to combine.  Put the mushrooms on top of everything, put the lid back on and cook until the mushrooms are cooked through and the pasta is done.  Spray an oven proof pan with pam and spoon the mixture into it.  Sprinkle cheese over the top leaving about 1/3 inch around the rim without cheese. (The cheese will melt and spread but will not drip over the sides of the pan).  When melted and hot throughout sprinkle 1/4-1/2 cup parmesan cheese and run back in the oven for a couple of minutes to melt.  Serve hot.

I was actually kind of surprised at how good this tasted and how well received it was.  There was not a morsel left, and that included the part that would not fit in my pyrex dish. (Don't even think all this will fit in a pyrex pie pan_it won't!  My mistake!)

If I had planned on doing this I would have bought some sliced black olives and scallions to put on top of the cheese. It would have been much more attractive and we all know we eat with our eyes first.  I also wish I had used mozzarella instead of cheddar cheese.  It is something I usually keep on hand but I guess the last time I used my back-up cheese I forgot to purchase more. ( And that is precisely why I like to keep a back-up to the back-up.  If I use my back-up and forget to buy it for a week it's ok because I have an automatic back-up anyway. So tomorrow, I have to buy mozzarella, a mozzarella back-up and a back-up back-up)  My advice to myself and everyone else is to keep that kitchen well stocked with staples.  I am going shopping tomorrow!

Try this, it is a quick tasty meal.  I served it with a large green salad and called it supper.  Doesn't get much easier or faster than this!
Posted by Anne in the kitchen at 11:29 AM