Tonight we tried a vegetarian dish with origins in India. Now if you are from there please don't tell me this is a highly Americanized version of a traditional lentil stew.  Let me be delusional and pretend I am well acquainted with foods of the world rather than just another American messing around with store bought Garam Marala and calling it Indian cuisine. OK?

I found several recipes and took what I had here to make the stew we ate.  It is a compilation of several recipes minus stuff I have never heard of, much less have in the house. (Do any of you seriously have black sesame seed in your pantry?  I am going to buy some just so I can answer "Yes" if anyone ever asks me that.  Of course when they ask the follow-up question about how to use them, I will have to  shrug and say "I dunno") 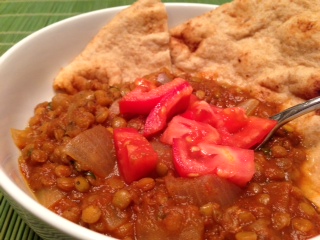 Saute the onion, garlic, pepper, and ginger in the coconut oil in a large soup pot.  Cook until all the vegetables are very soft but not caramelized.  Add the tomatoes, bouillon cubes, and water and stir to blend well.  Stir in the garam masala and add the lentils. Bring to a boil, cover the pot and turn heat down to medium.  Continue cooking until the lentils are soft. ( about 30 minutes) Do not overcook the lentils or you will have a giant pot of mush rather than a stew.  Lift the lid a couple of times and check to see if you need to add any additional water.  This should have the consistency of a thick soup.  Before serving stir in the cilantro and lime juice.  Serve with Naan* in a wide bowl.

This was delicious, earthy dish and makes me want to explore true Indian dishes.   It was extremely filling with a fantastic spice palette.   There is something so pleasing about heavy ginger and garlic anyway, but add the slight cinnamon and turmeric flavors from garam masala and the flavor explodes.  Just smelling it made my mouth water.  The only complaint I had with the dish was not the stew but the Naan.  I bought it at Publix and it tasted like honey and yeast.  I would have preferred the bread to be less sweet.  It almost interfered with the taste of the stew.

I had a good bit of the stew left over which I froze.  When I serve it again, I am tempted to add some shredded lamb to it.  I think the flavors would compliment each other.  Then again I might just serve it as is with an unsweetened Naan.  If you like the flavors of India you will probably like this.  Even if you are not certain, it's worth taking baby steps and trying it.

*Naan is an Indian flat bread usually baked in a super hot clay oven.  I found  this version and next time I will probably make it. (even though I have no idea what a couple of those ingredients are!)
Posted by Anne in the kitchen at 1:45 PM