I love to cook, that is a given based on the tone of this blog, but I rarely cook on the weekends.  I decided on the weekends I will blog about my second love, reading.  I  read in any spare time I can find and have been known to ignore secondary importance chores if a book is truly engrossing.  I also have been known (Thank goodness The Hub and Son3 were out of town) to buy a book like the "Harry Potter and the Deadly Hallows" at midnight on its release date and read straight through until I finished  the next afternoon.

When my kids were younger, I would have a book in my car at all times. As was carting them to and fro there always seemed to be wait time, usually in some ball field parking lot or sitting in a driveway during music lessons.  I learned early on to make all my to-do lists during that time, but I also used it for pleasure reading.  Now that they are grown there is much more time for reading and I find  I am doing it more and more.

Each year in the U.S. we "celebrate" Banned Book Week.  I am not a big fan of censorship, so at the beginning of the week I decide which of the top 10 most controversial books of the prior year I must read.  I feel the best way to demonstrate my displeasure with censorship is to not only read one from the list but also to buy it.

This year's list of controversial fiction had several books I have already read, so my choices were fairly limited.  I am passing no judgements on all of you who liked the Shades of Gray series but it was not on my "must read" or even "want to read" list. I am past the "Captain Underpants" demographic so that left just 2 books that I was mildly interested in. " The Absolutely True Diary of a Part Time Indian" and "Looking for Alaska".  I chose Alaska for 2 very superficial reasons.  The author attended a prep school near my home and it was written about the campus and surrounding areas.  I am familiar with the campus, and all the locations.  Plus I am from Alabama and understand the Southern ways and oddities.Part Time Indian looked like it would be equally good reading. 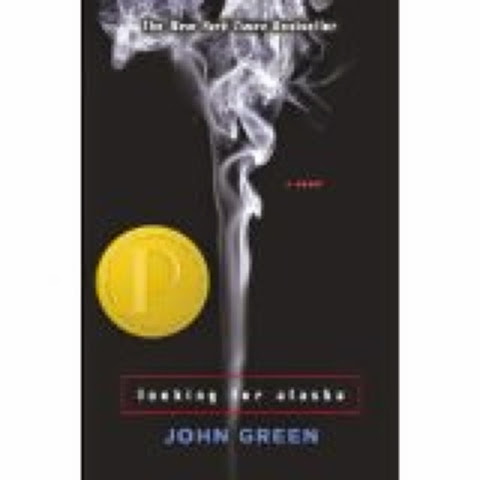 I certainly do not limit my reading to young adult literature, but I don't exclude ianything simply because that is the market age range. "Looking for Alaska" ( hereafter known as LFA) is  a book written for a young adult  readers, but is relatable to anyone who ever experienced any teen angst.  This book is constructed as 2 distinct parts called "Before" and "After". It is styled as a journal highlighting important days beginning 136 days before and ending 136 days after.  Each journal entry is the equalivent of a small chapter.
It is written in the voice of a socially awkward high school junior, Miles Halter, who has chosen to leave his public school in Florida for boarding life in an Alabama prep school.  He is seeking what he calls "The Great Perhaps".
The book opens with a farewell party he never wanted to happen in the first place. Mile's mother had planned an event for his "friends" to come see him off and only 2 people even make an appearance. "The only thing worse than having a party that no one attends, is having a party attended by two vastly uninteresting people". The stage is set, and we get a front row seat as Miles leaves this life he knows to enter into that great perhaps.
Because of a random roommate assignment  Miles finds his first true friend and new nickname, Pudge",   His new roommate, Chip Martin, AKA The Colonel, not only answers to a nickname himself, but bestows one on people near and dear to him. The Colonel is one of the few scholarship kids who are in school based on their academic prowess alone. He promptly accepts and introduces Pudge into his inner circle of friends. So the story begins with a cast of misfits and we get to be a part of Pudge's journey into a new dynamic.  He has left his home, familiar surroundings and usual food for the unknown.  Not only is he now in a boarding school, he is in an un-airconditioned room in "hot as Hell" Alabama, with characters who grew up in a very different culture than he was used to.

LFA takes us down the road of what is the best and worst of high school: the cliques, clique "wars", the vast chasm between the "haves" and "have-nots", intellectual elitism, the love of learning, learning to skate by, friendships, loves, school spirit, respect for authority, lack of respect for authority, pranks and just the day to day trials of being an awkward teen.
It touches some very difficult topics like death and what defines a person.  Are we the product of our upbringing or do we have some ownership over our futures?  What are we to blame on ourselves and what is just to be blamed on circumstances outside of our control.
It is not so much a "coming of age" story as it is a "coming to understanding" story.  I see why some parents might find it objectionable because it does have teens smoking, drinking and mild drug references and of course some mandatory exploratory sex.  Having raised 3 sons to adulthood ( youngest will be 21 next week) I know that every high school experience has some of that no matter where you go.  I would not have found it offensive if my kids had read it when they were young teens. I just would have read it along with them so we could discuss it.
I would highly recommend LFA if you are looking for a quick read, excellent story line, well developed characters and some tragedy.  If you only like "feel good" or Pulitzer books this is not for you,  I personally thought it was a very good, well written book. It was worth the small time investment for the amount of post reading pondering I have done.
Posted by Anne in the kitchen at 10:25 PM