I have never started a diet or new way of eating on a Friday before.  I mean, why would you want to spoil eating opportunities for the whole weekend when you can wait until Monday.  Ah, but then we all know Monday diets are destined to fail, so maybe Tuesday. All of a sudden Tuesday comes and you forget to start and who wants to start a diet after eating a muffin for breakfast.  Next thing it is Wednesday, then Thursday and still no beginning.  Once again it is Friday and the  cycle begins again, much like lather, rinse, repeat. Other than eating with reckless abandon over the weekend, I could find no good reason not to begin Friday, so I did.

This Whole30 concept is not a diet in the traditional sense, but more of an eating plan.  Much like Paleo it has no grains, dairy, beans, sugars, honey,MSG, yadda, yadda, yadda.  Unlike Paleo there is no contingent for making substitutes for those familiar things we all find delicious.  NO Paleo pecan pie, or Paleo cheesecake, or even Paleo pizza.  ( I will be honest and admit to creating "legal goodies" in my mind before I read that is was verboten) This is a straight up no frills whole food eating plan for 30 days.  Supposedly all manner of "good things" will happen once I clean the toxins from my system.  We will see, but as they say, it's only 30 days...and I will be finished well before Thanksgiving. ( I can't believe I thought that much less typed it, but I am trying to be completely honest about food, food thoughts and what I put in my mouth.)

Since it looks like I am going to be doing a lot of cooking, I will be posting my meals and any food successes or failures.  My biggest issue will be eating breakfast.  I know that I am supposed to and the theory of fueling the engine early, but I HATE food in my mouth early.  I would much prefer to have nothing but coffee until after noon, but it is not going to work that way. Drats!

Since I just launched into it this morning I had nothing bought or prepared, so today was pretty bleak eating.  It's ok though.  Now I have been to the store and am well stocked and over the next couple of days I will be getting a jump on meal prep for the next week.

Dinner: Huge bowl of chicken vegetable soup
Tossed greens with oil and vinegar dressing
Pineapple slice sprinkled with chili powder (Thank you Gloria for telling me about this) 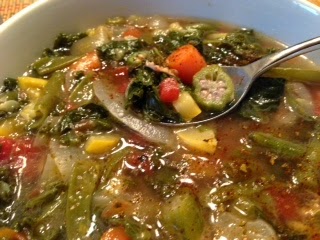 Pour the water into a large pot and add the chicken backs. On a mid heat cook them until the chicken is done and the meat is virtually hanging from the bones.  Remove the backs from the broth and add the chicken breast.  Poach until it is cooked through, remove from the broth and chop the chicken in bite size pieces.  Return the chicken to the broth and begin adding the vegetables in the order listed. Stop adding after the kale and let it simmer until the carrots are cooked through.  Add the squash and cook until it is soft. Leave the okra for last, letting it cook about 5 minutes.  You want it nicely  wilted but not slimy.  Serve in a large bowl.  I put about a tablespoon of homemade pepper sauce in the bowl since I knew it was made with no MSG or sugar.  I really wanted siracha but it has sugar listed as the 2nd ingredient.  Drats, again!


I figured soup would be great for supper tonight and would be good for quick lunches during the week. (I thinned it down with a bit more water and had about 6 servings.)  I will freeze part of it in individual serving packs for a couple of lunches later in the month.  It was really tasty and very filling.  (Possibly would have been tastier with cornbread slathered in butter__or not)

And about that pineapple.  Today, Gloria told me she often has fruit salad with chili powder sprinkled on top.   I thought it sounded weird but why not give it a try, so, I bought a pineapple and decided to sprinkle some over the top.  Oh my goodness!  Why have I not been doing this all my life? I took the initial bite right after sprinkling the chili on it.  It was a little musty tasting so I let it sit for 15 minutes then tried it again.  It had the traditional pineapple sweetness with some delightful heat.  I am going to do this from now on. 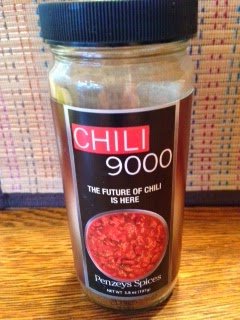 This is my new favorite chili powder.  It has zero added salt and a nice little punch of mixed chilies and a variety of herbs and spices.

Day one is over and now I am off to day 2 with a few things ready to make tomorrow easier. Or did I just knock of  the first of 30 days and am moving on to the 29 remaining.  I need help deciding if counting up or down is the most beneficial. Thoughts, anyone?

* I used chicken backs because a pack of 3 was 52 cents.  I have broth here but it has a few marginal ingredients, so I decided to just quickly make my own.  Obviously I chose a boney, cheap cut, but the good news was  the delicious cheap broth.