Weekend Whatever Book Review "The Family Fang" (Not a Vampire Book)

My book club reads a variety of books but most of the time we read fiction.  Trish suggested "The Family Fang: A Novel" by Kevin Wilson, so this is our most recent read. 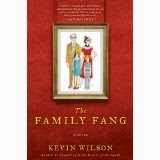 Before I get into the meat of the review let me tell you a bit about the novel.  It is written from the perspective of  Annie Fang, the daughter in the Fang Family.  Kudos  to Wilson.  Not to gender type writing, but it is often difficult for a male to write in the voice of a female, since the book is primarily written through her eyes.

I am not even sure how to begin.  Imagine you were born into a family of performance artists. But not just ordinary performance artists, but a couple who creates chaos just for the reactions of those caught in the fray. Then imagine that same couple (your parents) are not as thrilled to have a new baby as much as they are thrilled for another person to add to the "act".  Then multiply the hilarity by another child and the Fang Family bursts into action. With the help of a cadre of "artists" they begin filming their escapades as art, so not only do "Child A" and "Child B" have to participate in the performance, they are on public display via film.   Now imagine you somehow grow up and escape the lunacy and establish a successful career.  Next imagine the heartbreak when a series of unfortunate events cause
you  and your sibling to return to the family nest.

So begins a romp in a new and uncharted direction.  At times the plot line seems contrived until you begin remembering that everyone of us knows someone unconventional, bordering on just plain weird. When you start thinking of everyday real life oddness we see the lines between believable and the absurd blur. The book sets the stage for either the biggest tragedy or the biggest coup in Performance Art History.  I will go no further because I really dislike self indulgent spoiler reviews.   I will tell you for a fun quick read this is a blast.  To quote a friend "It's not literature, but it's a damn fine read."
Posted by Anne in the kitchen at 10:25 PM