Whatever Book Review "The House Girl" by Tara Conklin

The House Girl is a tale written as 2 overlapping narratives.  One is the story of Lina, a workaholic power attorney in a prestigious New York firm.  The other is the story of Josephine, a house slave for the Bell family in the 1850's.  The 2 stories merge when Lina's firm is hired to represent a major reparations suit for relatives of former slaves.  They focus on one particular slave named Josephine, whose image lives in a famous drawing from those times.  Lina's job is to try and track down relatives of Josephine, who disappears from all records in 1852. 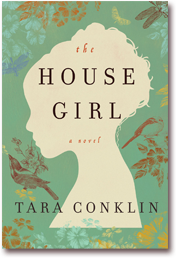 The story switches back and forth between Josephine and Lina.  Through theses flips we come to learn the "back story" of both Lina and Josephine, at the same time Lina is on the greatest legal investigation of her career.  We see that Lina is very devoted to her job and  and her future advancement in the firm, but at the same time very complacent and compliant with her personal relationships, particularly her relationship with her father.

We also find Josephine, the slave in the house, who is struggling with a decision to run away or to stay at the house and care for her ailing "Missus, who has been a kind person to Josephine.

The book is a decent read.  It tends to ignore a lot of the horrors of slavery, but it is not a book about slavery in general, but about one slave, Josephine.  I did not fine her story to be disingenuous and thought it was written well enough.

I did have some issues with the current day story.  I can't see and up and coming lawyer having such a milk toast personality in her day to day life.  To me it just didn't ring true.  Also the story of the hunt for Josephine and any surviving heris was a tad too contrived or my taste.

I finished The House Girl and was entertained. It made me think, but I mainly thought about how unrealistic some of the situations were. I did think about Josephine and how difficult and scary her choices were
but  I really did not think about Lina at all.
Posted by Anne in the kitchen at 9:03 PM