While we were in New York we had cookies from Levain Bakery.  It was the most delicious cookie I have ever put in my mouth and I knew I would have to try and mimic that deliciousness once I was home.  Since last Thursday I have been off the paleo diet and had already decided to give myself one full week  before hopping back on the caveman plan.  Well that week is up after today so I decided what better send off than knock off Levain cookies.

I spent a couple of hours searching the internet for knock off recipes and then read all the comments on each to see what had and had not worked.  I took what I guessed was the best of each recipe including several people's trial and error suggestions and mixed it up last night.  You have to portion the dough and let it sit in the refrigerator overnight, so we had no cookies until tonight.  Oh my, was it ever worth the wait. 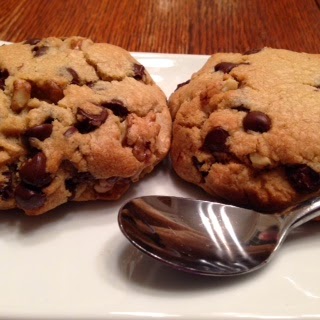 Put the sugars in a mixing bowl.  Using the beaters of a hand mixer or paddle of a stand mixer combine the sugars well.  Add the butter and beat slowly at first increasing the speed as the butter and sugar incorporates.  You want a light fluffy butter/sugar mix.  Turn the speed down and beat in the eggs, one at a time until they are well blended.
In a small bowl add the flour, cornstarch, salt, baking powder and baking soda.  Stir with a fork to combine well.
Slowly add the dry ingredients to the butter mixture and start the mixer on a very slow speed. Increase it only after the flour mix is all incorporated and only beat long enough to have a smooth dough with no flour visible.
With a wooden spoon, stir in the chocolate chips and walnuts to evenly incorporate them throughout the dough.
Roll the dough into balls that are about 4 ounces each. (I actually weighed the first one to see what 4 ounces of cookie dough looked like and then I eyeballed the rest) You should get 12-13 dough balls out of this recipe. I cut strips of parchment paper and wrapped it around each ball before putting them in a ziploc bag then into the refrigerator.  They stayed there for about 13 hours before I baked them.

My oven is pretty true to temp and I have a baked goods convection setting.  I set it for a standard 350 degree setting to preheat.  Line a cookie sheet with parchment paper (important) and place the cold dough on it. (I could only bake 5 cookies* at a time on my largest cookie sheet) Bake for about 17 minutes, remove from the parchment and place on a rack to cool until warm enough to eat without burning your mouth on the melted chocolate. (5 or so minutes)  The cookies are crispy on the outside and ooey gooey chocolate deliciousness on the inside.  I suggest a large glass of milk or cup of hot coffee on the side.  One cookie is more than enough for any human, except for TheHub who not only ate 2 of them, but then argued with me when I told him he had just eaten at least 8 ounces of cookie dough. ( How would I even know that, all I did was bake them, right?)

For an honest comparison I would have to have one of the original cookies to do a taste/texture test. Since I don't have access to one I am having to rely on my memory of that cookie and to be honest these are pretty darn close.  I used Nestle's chocolate chips and there was a difference in the taste and texture of the chocolate.  I don't know if they use Guittard or not but those are the best chocolate chips I have ever used and I think they would be much better.  The texture of the cookie itself was pretty much spot on. It had a nice crisp outer coating and a very tender gooey cookie interior.

I can see making these regularly, because it is the only time I have ever eaten just one cookie (OK so the cookie is only slightly smaller than a standard hamburger bun, I still count it as eating just 1!)