I have been looking through my traditional methods of preparing foods and remaking them to fit a paleo food plan.  For the most part it is not difficult, but I will be honest and say the results vary. Some dishes do not transition as well as others.  This is one that did, but I also learned a few things I will change next time.

Normally when I make scampi, I use butter.  There seems to be differing opinions on whether butter is paleo or not, and since I can't find a definitive answer I am not using it.  Because of that, the sauce is not as rich or velvety as it normally would be, so I had to amp up some of the ingredients a bit for added flavors.

Chicken Scampi with a Twist of Paleo 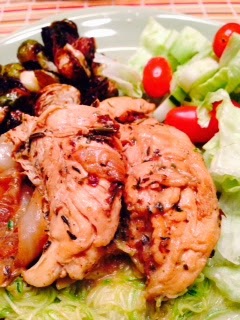 Heat the ghee and oil and quickly brown the chicken . (I got lazy and did not cut mine into bite sized pieces.  It is a much more appealing dish with smaller bits)  Remove the chicken from the pan and turn the heat down to a medium low.  Cook the onions until they are wilted.  Turn the heat down a little lower and cook them until they are a caramel color. (It keeps the finished dish from looking anemic).  Turn the heat back to mid high and add the garlic, cooking just long enough to wilt it, but not long enough for a color change.  Toss on all the seasonings, the broth and the lemon juice.  Add the chicken back to the pan and cook until the chicken is cooked through. (Should take about 5-7 minutes if the pieces are smaller) Stir often and add more liquid if necessary.  If using no butter, add a couple of tablespoons of almond milk and let it cook until it is reduced by about half.  Serve hot over pasta or in the paleo world over spiral cut zucchini. (Which tastes absolutely nothing like pasta, but it does make a rather nice "bed" for the chicken to sit on)  Spoon any pan liquids over the chicken and enjoy.

This tastes pretty close to a standard chicken scampi dish, but it has a different mouth feel. The sauce sticking to the chicken pieces is usually smoother and creamier.  I added the almond milk to try and copy the creaminess and it fell short.  Maybe if I had used coconut oil rather than ghee it might have felt more like butter, but then I would have had that cloying coconut sweetness that I don't like in savory foods.  6 of one half a dozen of the other, I guess.  So pick your battles or use butter and say to heck with it!

* If you use butter instead of ghee use 3 tablespoons plus the additional 1 tablespoon of olive oil.
** If you are not doing paleo don't add the almond milk.  It will add nothing, plus you're already getting the flavor and consistency from the butter.

Posted by Anne in the kitchen at 7:05 AM