Red Curry: Paleo or Not, Your Choice

A couple of days ago I offered to go to the Independence Place for a little volunteering, creating, and fellowship. Debbie (the same one I have mentioned whom you can't tell no) suggested I come at 2:30 in the afternoon, so I said it would be no problem.  When I checked my calendar to confirm my availability I only looked at the things I had planned for the daytime.  I forgot to check my evening commitments or I would have seen that I had a dinner party planned for that night. (Not checking is just the first of many bad plansfor the day)

This would normally not be an issue but I knew I would not be leaving IP until after 4, which then would put me driving home with all the others at the beginning of drive time.  Again this would normally not be a problem, but IP is a good 30 minute drive from my house under the best of circumstances. Additional traffic and the usual back-up at the 459/65 exchange makes it a 45 minute drive.

Again doable if I got home at 4:45.  I would still have enough time to get dinner cooked and be ready for guests at 6:30, except in addition to a dinner party I was in the process of Christmas decorating. (I will be out of town all next week through late night on the 30th. Then I will immediately start the process of the Santa Letters which will consume the next few days. My neighborhood lights up the day after Thanksgiving and I want to be shiny like the rest of the subdivision. And yes, my house will be a tad overdone when I am finished.) All morning I was working on getting a little Christmas going and tidying the house. It took a little longer than I thought it would and I did not have time to stop by the grocery store before I left for IP.  So now I would not only be late getting home, but I had an additional 15 or so minutes tacked on the the already late arrival time.

I had read a recipe in a free download Kindle cookbook recently and remembered it as I was driving home. I remembered it basically cooked itself so that is what I decided to make.Fortunately I recalled enough of the ingredients and knew I could always punt if I needed to. (Understand I keep a very well stocked pantry) So I stopped to grab chicken, lemongrass, carrots, a shallot, a couple of packages of naan, dessert from the bakery, brown jasmine rice, and some wine.

As it turned out I remembered the recipe a little differently than it was written, so I am posting this as I made it.  It is supposed to be an Indian red curry, but since I did not re-read the recipe until I was about half way though putting the ingredients in the pot, it might be more of a Thai/Indian fusion curry.  Oh well! The most important thing was that I could get everything in the pot and let it cook with little interference from me while I vacuumed and set the table.  (I know this looks like a lot of ingredients, but most of them are just spices so don't let that scare you.) 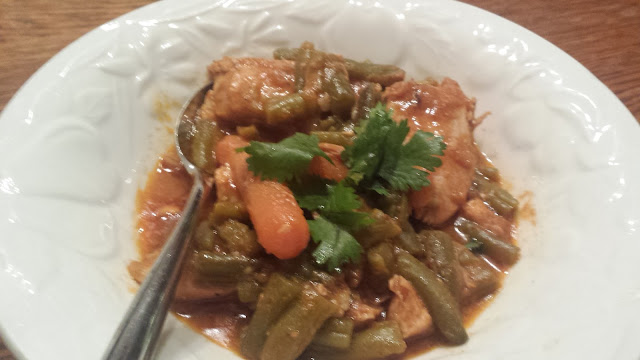 In a large enamel pot (or something similar) saute' the chicken pieces in the oil.  When the chicken loses its pink color throw in the onions and shallots and begin the wilting process but do not brown.  After they have wilted toss in the garlic and the ginger and stir it for about 30 seconds.  Immediately add the coconut milk and the chicken broth.  Stir in the tomato paste and continue stirring until everything is combined.  Add the red curry paste and blend well, then add the spices.  Put the lid on the pot and let it cook over a low heat for about an hour. After an hour add the carrots and green beans.  Turn the heat up to medium low until the vegetables are cooked through. This can sit on the stove on low for a while as long as you stir it occasionally. (I know for a fact it will simmer happily through an appetizer and a couple of glasses of wine)

Right before serving add the lime juice and stir through.  Serve in a large bowl over rice and garnish with cilantro leaves.  If you are doing that paleo thing just leave the rice out or serve it over cauliflower "rice".

The verdict on this was unanimous. It was delicious and everyone loved it. The only problem is that I have fat eyes and served huge portions that no one could finish, especially after wine and apps and the potential of chocolate pie for dessert. For the first time ever I had 2 guests who asked for doggie bags so they could have their remains for lunch the next day.

Tonight we had the final leftovers for supper and it was possibly even better after a little time in the fridge. I am going to be making another large batch and freezing it in dinner size containers for crazy nights when cooking is an issue.

p.s.  The spice measurements are the result of tasting repeatedly and adding a little of this and that until I found a flavor I liked.  Right before they got there I had to put about a dozen spoons I had used for tasting in the dishwasher, but it turned out very well. The original recipe did not call for green beans or carrots, but I needed some additional vegetables so I added them.  I will add them next time also, but I will probably also add some red and yellow peppers and cubed sweet potatoes.