Paleo or Not: Buffalo Chicken Casserole

If you look at my last 2 recipe posts you might think I am on some Buffalo chicken quest, when nothing could be further from the truth.  I simply have an odd way of planning meals.  Instead of thinking days in advance and planning an honest meal plan, I  buy whatever the weeks grocery deals are.  Each week I have a lot of raw products but no idea how I will put them together until the day we are going to eat them.  Consequently I do a lot of googling (I love that it is considered a real word now) and punting on a daily basis.

The other day I was looking for a paleo casserole recipe to use some cooked chicken I had in the fridge. I kept searching, reading one recipe after another after another, but I didn't bookmark any of them. I would follow one link after another creating new tabs then closing them out as I was through reading. I found one for  a Buffalo chicken casserole and thought it sounded good, but did I book mark it? Uh, no.  Could I find it in my history? Uh, no. (I know it is there, but after clicking on a few dozen recipes I got tired of looking so I decided to just try and create it. From memory!  Oops, the only thing I remembered was a medium spaghetti squash and a red pepper. Nonetheless I went ahead and tried to replicate it.  I have no idea how close I came to the original, so apologies to whomever you are. ) I am not trying to claim this is original, I just don't remember who you are and I hope my memory is somewhat close to what you published. 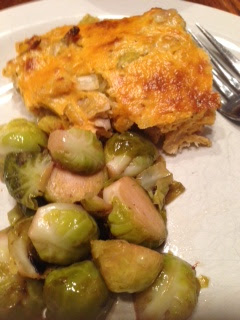 Preheat the oven to 350 degrees. Put the spaghetti (either squash strands or noodles) in a very large bowl. Add the chicken.  In a saute' pan heat the olive oil and quickly wilt the celery and the onion. Add the pepper and get a nice wilt going on it also.  When everything is nice and wilty but not brown toss in the minced garlic and stir it around the pan for about 30 seconds.  Take the pan off the heat and quickly dump all the veggies in the bowl with the chicken and spaghetti.  Mix it well adding salt and pepper. Add more to your personal taste if needed.

In a small bowl mix the mayo, hot sauce, nutritional yeast (gives paleo food a cheesy taste) or cheese and the beaten eggs.  Make sure everything is well blended. I used a whisk instead of a spoon on this just to get it mixed very well. 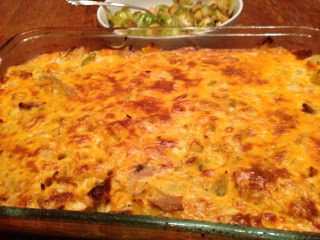 Grease a 9x13 pan and put the chicken/spaghetti/veggie mix in it.  Make sure it is even in the pan, then pour the eggy mayo mixture evenly over the top of it.  When I did it I noticed the sauce did not soak into the vegetables and chicken so I took a chopstick and poked holes all over it until the egg mixture seeped down into the pan.  Bake for about 35 minutes, until the top is browned and looks "crispy".


And here is the verdict:  I eat paleo foods regularly, so I understand spaghetti squash will not have the same mouthfeel that real spaghetti does.  TheHub was thrown off by the texture but he loved the taste.  I personally thought it was one of the best paleo dishes I have eaten.  The taste was fantastic! It had a wonderful flavor and some nice heat that was not overpowering. Yum!

I will make this again and will probably start having it a couple of times a month, because I can put it together in the morning, cover it in the fridge then bake it in the evening.  But, and this is an important but for us, I will make 2 pans of it.  One with spaghetti squash for me and one with regular spaghetti for TheHub. (For the record he had no idea it had nutritional yeast instead of cheese, so I won't even bother adding real cheese to his, but if I were not doing paleo, I would add blue cheese crumbles in a heartbeat.)

If you follow a paleo diet try this  and you will probably love it.  If you are not paleo try it using noodles and cheese.  I think you might find it is a keeper.