Tonight for the first time in about 3 weeks I actually cooked.  I don't want to imply that I have not prepared meals for 3 weeks but I mainly reformatted foods that already existed completed and living in the freezer.  We have eaten soups, thawed and warmed lasagne, bbq pork baked potatoes, various salads, yadda, yadda,yadda.  I honestly do not think I have prepared anything totally from scratch in at least that long. (OK, truth here,  I cook for the freezer often just for weeks like this, so at one time this stuff was home cooked, but when all I have to do to get a meal on the table is thaw and heat I don't think of it as real cooking even when it was me who did it to begin with. And that was an incredible run on sentence that I am going to let stand!)

Tonight I began strict paleo eating__again and was determined to put a tasty meal on the table.  So bright and early I took chicken out of the freezer to thaw, made sure I had everything I needed and was waiting for time to begin fixin (see I am from the South) dinner.  At about 4 the phone rang and it was TheHub who found out he had to go to dinner with some people who were in town.  Well that meant dinner was now for 1 and my normal M.O. would be to just fix a peanut butter sandwich and then grab some leftover Halloween candy from the freezer and call it good.  Since I had already been true to the paleo plan I figured there was no reason to scrub the diet and then have to begin day one all over again tomorrow.  So I drove back home and began to prepare a self indulgent meal just for me. 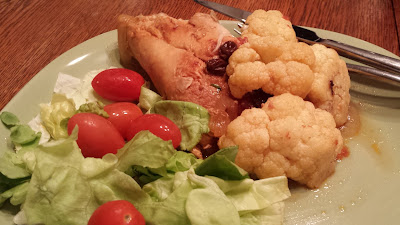 In a dutch oven with a lid, brown the chicken in the coconut oil.  Add the onions and wilt.  Stir in the minced garlic and allow to wilt but not to brown.  Pour in the tomatoes and the chicken broth.  Add the spices, lemon juice and raisins.  Turn the heat down to medium low, cover with the lid and let everything simmer until the chicken is nice and tender. (It took about 45 minutes on the mid low setting)  Check about 3 times during the cook time and add additional water or broth as needed.  I found I had to add another cup of liquid about half way through.  When the chicken is done, raise the heat to medium and toss in the cauliflower.  Cover and cook until the cauliflower is tender.  To serve put a little sauce on the plate, cover with the chicken breast and surround with cauliflower.

As it turned out, Son2 came here right at supper time.  I was glad to have both the company and another tester for the chicken. I could have/should have cooked a little rice for the non-paleo diner, but I didn't.  Show up at dinner time and you get to eat what I am eating, right?

It was very tasty, light yet filling at the same time and the chicken was fall off the bone tender.* I was a little worried that the cinnamon would leave a strange taste, but all the flavors melded very well. Oh and don't be put off by the raisins. They plump nicely and take on the flavor of the spice blend, but retain some sweetness.* The cauliflower also absorbed some of the liquids flavors which made it very delicious and it needed no additional sauce.  This is going to go in my food rotation and next time I will make a gigantic pot for freezing.

There are a couple of things I will do differently next time. When I make it next, I am going to use thighs* rather than chicken breasts only because I think thighs would hold moisture and sauce flavor better than the breasts did.  I also will cut the raisin amount down a little (maybe use 3/4 as much) and will coarsely chop them.  I think pieces would have a better mouth feel than the whole raisin. (The flavor they brought to the dish was too good to eliminate them.)  The only thing this dish needs for anyone doing a non paleo meal plan is some rice. I will be sure to make a pot of basmati rice and will serve it over the rice, well to everyone but me.

If you are looking for something different to do with chicken, you might want to give this a try.  It was well worth trying!
Posted by Anne in the kitchen at 10:48 PM