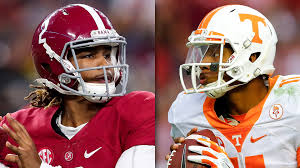 We were at the lake place for another football weekend.  Just exactly how many college games can
we possibly watch on any given Saturday?  With the channel jump function on the TV remote it is possible for us to keep up with 3 games at one time x the games start times (11. 2:30, 6:00, 7:00 and 9:30 Central) OK only the 11 and 2;30 games usually have 3 games we are interested in, and the 6 pm game generally has only 1 game. 2 for the 7:00 game and the west coast game we might or might not be interested in at all.  I still think we watch at least parts of 10 games on Saturdays. (Yeah, OK, I read while everything but the Alabama game is on.  Football is a slow enough sport with so many replays that intermittent watching works fine)

TheHub and Son2 go to each and every home game, so on those days I only have to make whatever I want, which is usually some fruit and popcorn.  For away games we head to the lake place.  It seems like we so nothing there but eat and watch and eat a little more.

I don't mind cooking, in fact I love to cook but we do not keep many food items at the lake. If it is not in a can or something I can store in the refrigerator or freezer I do not keep it there at all. (The lake fridge and freezer are filled with rice, pasta, powdered milk,coffee, flour. corn meal, grits brownie mix__anything that might be enticing to a lake mouse, but is a staple I really like to have on hand. ) Consequently I have to load food in and out every weekend we are there.  It is not a big problem but it does take planning since I do not like bring anymore home than I have to. And at the same time I am planning meals and snacks, I don't want to spend a lot of time there cooking.

I make TheHub and me a small breakfast, because we wake early to sit on the deck  and drink coffee while we watch the sun rise.  Our lunch is just a day of grazing.  I make dip using kefir as the base and we have tons of raw vegetables, and usually some tortilla chips and salsa. Dinner was the meal that kind of pissed me off, because I did not like getting off "The Drug Couch "(so named because no one who has sat on it longer than 30 minutes has not gone to sleep on it) to cook.

Several years ago I bought one of those 3 crockpots in one unit just for Christmas brunch and yes it made my life so much easier that it was worth the price for using only once a year. Then, about a year ago  I had a "Eureka Moment" and realized since all three have separate controls there was no reason not to use a single crockpot regularly, even if it meant having the entire unit on the counter. ( I am a slow learner).  I carted the old single crockpot to the lake, and my life changed immediately for the better.  Now I toss whatever we are going to be eating for dinner in the slow cooker in the morning  and by the evening we have something delicious with little effort on my part.

Cut the slab of ribs into sections that will fit into the crock pot.  Pour the beer and bbq sauce over them.  Add salt and pepper ( I use a teaspoon of each) Put the lid on and turn it on low to cook for about 8 hours. You can also cook it on high for about 4-5 hours if you don't start it early enough in the day.  Mid way through cooking add the sliced onion to the top of the contents. Cook until the ribs are fork tender.  Remove the ribs and pour the cooking liquid in a medium saucepan.  Heat on high heat until the mixture reduces by 1/2.  Pour about 1/2 cup of the liquid in a heat proof bowl (coffee mug) and add the cornstarch stirring to make a paste.  Slowly add it back to the cooking liquid and cook until it thickens a little. (Add more cornstarch if you want it thicker, but remember to put some liquid in a bowl to mix with the cornstarch before pouring it into the braising liquid.  If you just dump the cornstarch straight in you will get lumps you will never be able to get out. (And who wants to eat bbq sauce that has globs that feel like fish eyeballs?)

For us, this, along with tomato slices and cucumber spears is more than plenty to eat, with ribs leftover for the next day.

I forgot to take a picture before we chowed down, so sorry!  This was delicious, quick and like I said, we have enough left over for tonight.  I guess I am not planning on cooking!
Posted by Anne in the kitchen at 12:50 PM