A few weeks ago we were in New York to hear Son3's last official school concert. We stay at the same hotel every time mainly because of its convenience.  It is very close to the performance venue/s and has quite a few really delicious restaurants within a block of the hotel entrance TheHub has a tendency to eat at the same places every time we are there. At night they cater to the Lincoln Center crowd (both pre and post event meals) and are quite pricy. I usually don't say too much about it because the food is fabulous but there are approximately 24,000 places in the city to procure something to eat so why stick  to the same dozen places.?

I secretly conspired with Son3 who has a lot better luck than I do getting his dad to venture out and we wound up at Flor De Mayo, A Chinese Peruvian fusion restaurant, around Amsterdam and 85th (ish) where the aroma of something good about to happen hit us as soon as we opened the door. TheHub and Son3 opted for the roasted chicken which is their house speciality for good reasons. It was outstanding.  (Yes, we are that family who shares bites just to make sure everyone at our table knows how delicious our choice was.)

I am generally pretty good about picking out the different flavors of seasonings, so I decided to try and replicate what they used on it. I know it had allspice because I could taste it and I think it had a little cinnamon, but I am not positive so I added a little anyway. It had a fairly mild herb so I chose thyme and then just added a couple of traditional Chinese and Latin spices. When all was said and done this was the final result of my efforts and it was pretty darn close to what they served. Or at least it was close to what my taste and smell memory thinks it was. 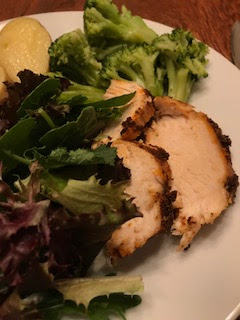 Rub the olive oil over the chicken. Place in an oven safe pan and sprinkle liberally with the seasoning. Bake at 350 degrees until the chicken is done. (It took me about 35 minutes)
Slice or serve as a whole breast.  We had 3 people eating and only 2 chicken breasts so slicing was necessary.  Yum good!
Flor De Mayo serves this with a vinegar based dipping sauce, but I did not think about it until the chicken was out of the oven.  It tasted like pickled chopped onions of sorts with a strong vinegar taste.  I will work on it next time, but this was really delicious without it.

I am going to increase the measurements and make a spice jar full of this to have on hand for regular seasonings. I think it would be equally good on pork and possibly on fish.

Posted by Anne in the kitchen at 7:38 AM